Airlines and Scientists Clash Over the Volcanic Ash Cloud 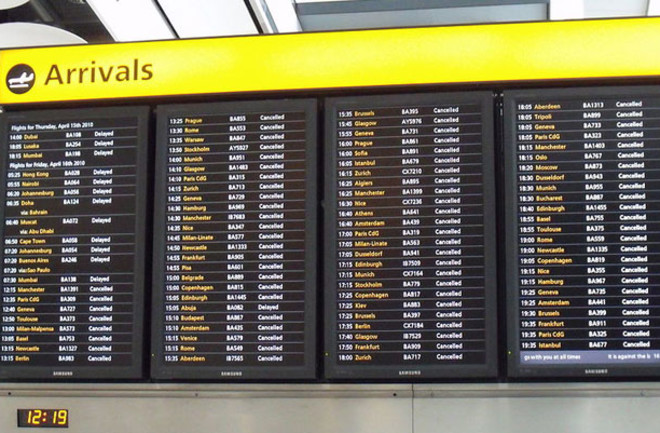 Six days after ash from Iceland's volcano paralyzed European airspace, aviation experts and academics are arguing over whether the entire mess could have been avoided. Ash from Iceland's Eyjafjallajokull volcano started to spread across North European skies last week, grounding thousands of domestic and long-haul flights and causing an estimated $1 billion in losses. Today the European Union attempted to get the continent moving again and reopened certain routes, giving millions of stranded passengers a chance to head home and throwing a lifeline to airlines that were hemorrhaging an estimated $250 million a day. However, this grounding of flights drew sharp rebuke from Giovanni Bisignani, director general of the International Air Transport Association (IATA), who argued that the entire mess could have been avoided had the airlines focused on facts and figures on actual damage caused to jet engines by volcanic ash, saying:

“Europe was using a theoretical mathematical approach and this is not what you need. We needed some test flights to go into the atmosphere and assess the level of ashes and take decisions” [Reuters].

Unsurprisingly, the European Union's transit officials have replied that they're not willing to compromise on passenger safety. Airlines canceled flights to and from Europe because the silicate particles in volcanic ash are known to create a glass-like coating inside airline engines when they fly through ash clouds. In 1982, more than 200 passengers on a British Airways flight had a narrow escape when the plane lost power in all four engines after flying though an ash cloud over the Indian Ocean. Not willing to risk a repeat of that terrifying incident, the European Union shut down flight routes last Thursday. NATO also limited military exercises after volcanic glass built up in fighter engines. However, British Airways and Air France-KLM say they have both operated test flights in the region since the eruption, and they report that they encountered no problems due to the ash. Bisgnani argues that this proves that the governments made a mistake imposing a “blanket ban” on air travel in northern Europe. He said

decision-makers should consider setting up “corridors” to repatriate the estimated 7 million passengers stranded across the globe [Reuters].

But atmospheric scientists explain that volcanic ash clouds pose a very tricky threat to pilots, who can't see the clouds of tiny particles. They say that instruments could be installed on airplanes to help pilots detect large concentrations of ash as they fly--the instrument's warnings would prompt the pilot to drop down to a lower altitude to steer clear of the ash. However, not many of these expensive, specialty detectors currently exist. Experts add that there's no guarantee that switching altitudes would give the pilot the all-clear, as changing wind conditions could move the ash to lower altitudes, too. Says aviation engineer Stewart John:

Bisignani, meanwhile, argues that there needs to be consensus on what constitutes a safe concentration of ash. Aviation consultant Chris Yates says the volcanic ash guidelines were drawn up by a UN body, the International Civil Aviation Organization. Regulations for grounding the flights to protect them from volcanic ash, Yates says, were based on