After a Firebombing, "Pro-Test" Rallies in Support of Animal Research 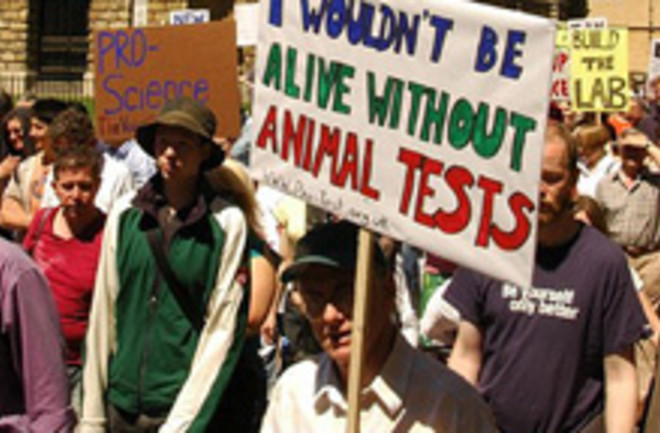 A neuroscientist whose car was firebombed by violent animal rights activists has decided to fight back, at least in the court of public opinion. The UCLA professor, David Jentsch, has formed a group called UCLA Pro-Test, and is organizing a rally in support of animal testing.

"People always say: 'Don't respond. If you respond, that will give [the attackers] credibility,'" Jentsch, 37, said in a recent interview in his UCLA office. "But being silent wasn't making us feel safer. And it's a moot point if they are coming to burn your car anyway, whether you give them credibility or not" [Los Angeles Times].

UCLA Pro-Test, named after a similar group in the United Kingdom, wants to show its support for animal research that is conducted in a humane and regulated way. Jentsch studies schizophrenia and drug addiction, and works on both rodents and vervet monkeys. The Animal Liberation Brigade took credit for bombing Jentsch's Volvo as it sat in his driveway in the early morning hours of March 7. The activist group wrote in an Internet posting:

"The things you and others like you do to feeling, sentient monkeys is so cruel and disgusting we can't believe anyone would be able to live with themselves.... David, here's a message just for you, we will come for you when you least expect it and do a lot more damage than to your property" [Los Angeles Times].

Jentsch's schizophrenia work focuses on the genetic component of the disease. As part of this work, he gives the monkeys non-invasive memory tests and brain scans, and euthanizes fewer than 10 monkeys a year for postmortem exams. In his drug addition research, he addicts monkeys to methamphetamine and then withdraws the drug in an effort to find better treatments for human drug addicts. About six monkeys are killed each year for the addiction research, Jentsch says. Jentsch explains that he doesn't expect to win over the extremists.

"We can have an open and honest discussion with them to explain the place for animal research in society. But they won't change our mind anymore than we can change theirs" [Nature News]

, he says. However, he hopes the upcoming rally on April 22nd will help the general public understand why most scientists believe that animal testing holds enormous value to society, and will also give his colleagues a dose of confidence.

"The people now traumatized are the ones who know they are next. Those people need support" [Nature News]