After 17 Years, Billions of Cicadas Are Ready to Emerge 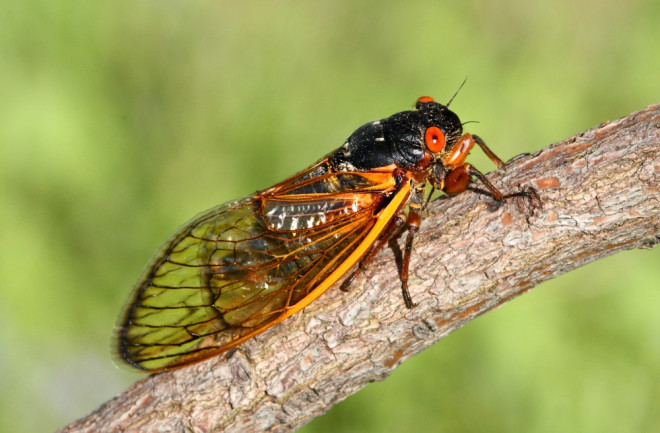 Summer is going to be a little noisier this year on the East Coast. Once the soil temperatures rise sufficiently, billions of cicadas are expected to emerge after spending 17 years underground. The soon-to-emerge cicadas were born in 1999 and spent the years feasting on secretions from plant roots. After toiling in the dirt for close to two decades, the cicadas will climb a tree, shed their nymphal shell, and proceed to get dirty — in the figurative sense.

Locations That Will Be Abuzz

The batch of 17-year cicadas set to surface in April or May, called Brood V, is comprised of three different species: Magicicada cassinii, Magicicada septendecim and Magicicada septendecula. They’ll start popping out of the soil when temperatures 8 inches beneath the surface reach 64 degrees Fahrenheit, which is expected to occur by May or late in April. There are 15 different cicada broods, and the designations are based on the calendar year in which they emerge. Brood VI, for example, will emerge in 2017 in parts of Georgia, North Carolina and South Carolina. You can expect to hear Brood V cicadas in parts of Maryland, New York, Ohio, Pennsylvania, Virginia and West Virginia, according to

After spending 17 years in the soil, life for a cicada moves into overdrive. Adults live just two to four weeks after they emerge — most of that time is spent mating. The loud buzzing you hear during a cicada invasion is the chorus of males attempting to sing a seducing song to a female. The males “sing” their song with specialized noisemakers, called tymbals, which are structures of the exoskeleton located on both sides of their abdominal region. Males produce sound by flexing and relaxing muscles attached to their tymbals. After cicadas mate, females lay hundreds of rice-sized eggs in tree branches. They’ll hatch a few weeks later and head underground, which will serve as their home until 2033.

Species of cicadas emerge on 17- and 13-year cycles, and scientists believe this cyclical strategy evolved as a way to overwhelm predators with shear numbers. When billions upon billions of bugs take over a small area, local birds can only eat so many. Therefore, a large number of cicadas survive to spread their seed. However, there’s a mystery here: populations of birds that eat insects are typically on the decline before an emergence event. Two years after the cicadas emerge, the bird populations boom. According to researchers’ theory, cicadas might be modulating bird populations through unknown mechanisms. Cicada emergence events always occur in prime numbers. That may reduce their chances of predation, since most predators have lifespan cycles of roughly 2 to 5 years. Emerging every 13 or 17 years might reduce the odds that predators will be experiencing a surge in population during emergence years. And, by the way, every so often 13-year and 17-year brood emergence events occur at the same time in overlapping territories. The next simultaneous emergence event will occur in Missouri in 2219.