A "Zombie Gene" in Elephants Could Protect Them From Cancer 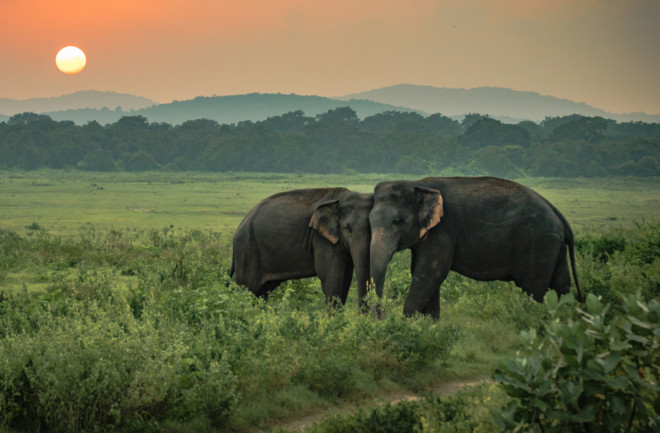 (Credit: Gregory Zamell/Shutterstock) Millions of years ago, a gene in mammals became useless. Now scientists have discovered the gene has come back to life in elephants, where it’s exceptionally good at killing damaged cells. The “zombie” gene may explain why the long-lived pachyderms rarely develop cancer and how large animals evolved.

Elephants are a paradox for scientists. The giants appear largely resistant to cancer, which is odd as their long lifespans and humongous size ought to make them highly susceptible to the disease. The thinking goes that the longer one lives, the more time the body has to pick up cancer-causing mutations. Likewise, big bodies have more cells than small ones. Since all cells are equally vulnerable to damage, more cells mean higher risk for developing the condition. Elephants are guilty on both counts, yet the behemoths get cancer far less than scientists expect. Vincent Lynch, a geneticist and evolutionary biologist at the University of Chicago in Illinois, wanted to know what gives elephants this cancer immunity. He figured long-lived, sizable animals like elephants must have evolved a way to protect themselves from the disease. So, he and his team probed the genomes of more than 50 long-living mammals that run the gamut of animal body sizes from bowhead whales to bats, voles and naked mole rats. Their analysis revealed that elephants, as well as manatees and hyraxes, have seven to 11 extra copies of a gene called LIF, whereas every other animal they investigated has only one.

In most mammals this single copy of the LIF gene can help prevent cancer development under the right circumstances, so elephants’ numerous duplicates seem like a boon. But it turns out that most of these extra LIF genes don’t do anything anymore. "We found that elephants and their relatives have many non-functioning copies of the LIF gene," Lynch said in a statement. But “elephants themselves evolved a way to turn one of these copies, LIF6, back on.” The researchers had shown in previous work that elephant’s cells are highly sensitive to DNA damage. So, to figure out if LIF6 might play a role, the team stressed the cells with carcinogens. Although LIF6 is normally turned on at very low levels, when DNA damage occurs, it gets expressed at much higher rates. That activates a series of reactions that lead to cellular suicide in the potentially cancerous cells, the team reported August 14 in the journal Cell Reports. "The elephant cells just died; they were entirely intolerant of DNA damage in a way their relatives' cells were not," Lynch said. "Because the elephant cells died as soon as their DNA was damaged, there was no risk of them ever becoming cancerous." When the team put the gene into other animals’ cells growing in petri dishes, those cells also died. That makes LIF6, the zombie gene that came back from the dead to kill weak cells, a potential cancer-fighter in other species besides elephants as well. The work also begins to solve the mystery of elephant’s large size and long lifespan. An evolutionary comparison of LIF6 in elephants, mammoths and mastodons revealed LIF6 came back to life in elephant ancestors around the same time the animals became giants, meaning the gene may have played a role in allowing animals to evolve large bodies.