A warmer ocean is a less green one

The Earth’s oceans are mysterious and largely unexplored. Many of their inhabitants are familiar to us but their whereabouts and numbers are far less clear. This is starting to change. In two new studies, Boris Worm from Dalhousie University has revealed an unprecedentedly detailed portrait of the planet’s marine life, from tiny plankton to mighty whales. And with that knowledge comes concern, for neither study paints an optimistic picture about the fate of tomorrow’s seas, as changing climate slowly raises their temperature. Graduate student Daniel Boyce focused on some of oceans' smallest but most important denizens – the phytoplankton. These tiny creatures are the basis of marine food webs, the foundations upon which these watery ecosystems are built. They produce around half of the Earth’s organic matter and much of its oxygen. And they are disappearing. With a set of data that stretches back 100 years, Boyce found that phytoplankton numbers have fallen by around 1% per year over the last century as the oceans have become warmer, and if anything, their decline is getting faster. Our blue planet is becoming less green with every year. Meanwhile, post-doc Derek Tittensor has taken a broader view, looking at the worldwide distributions of over 11,500 seagoing species in 13 groups, from mangroves and seagrasses, to sharks, squids, and corals. His super-census reveals three general trends – coastal species are concentrated around the western Pacific, while ocean-going ones are mostly found at temperate latitudes, in two wide bands on either side of the equator. And the only thing that affected the distribution of all of these groups was temperature. Together, the results from the two studies hammer home a familiar message – warmer oceans will be very different places. Rising sea temperatures could “rearrange the global distribution of life in the ocean” and destabilise their food webs at their very root. None of this knowledge was easily won - it’s the result of decades of monitoring and data collection, resulting in millions of measurements. Boyce’s study, for example, really began in 1865, when an Italian priest and astronomer called Father Pietro Angelo Secchi invented a device for measuring water clarity. His “Secchi disk” is fantastically simple – it’s a black-and-white circle that is lowered until the observer can’t see it any more. This depth reveals how transparent the water is, which is directly related to how much phytoplankton it contains. This simple method has been used since 1899. Boyce combined it with measurements of the pigment chlorophyll taken from research vessels, and satellite data from the last decade. Boyce’s data revealed a very disturbing trend. Phytoplankton numbers have fallen across the world over the last century, particularly towards the poles and in the open oceans. The decline has accelerated in some places, and total numbers have fallen by around 40% since the 1950s. Only in a few places have phytoplankton populations risen. These include parts of the Indian Ocean and some coastal areas where industrial run-off fertilises the water, producing choking blooms of plankton. On a yearly basis, the rise and fall of the phytoplankton depends on big climate events like the El Nino Southern Oscillation. But in the long-term, nothing predicted the numbers of phytoplankton better than the surface temperature of the seas. Phytoplankton need sunlight to grow, so they’re constrained to the upper layers of the ocean and depends on nutrients welling up from below. But warmer waters are less likely to mix in this way, which starves the phytoplankton and limits their growth. 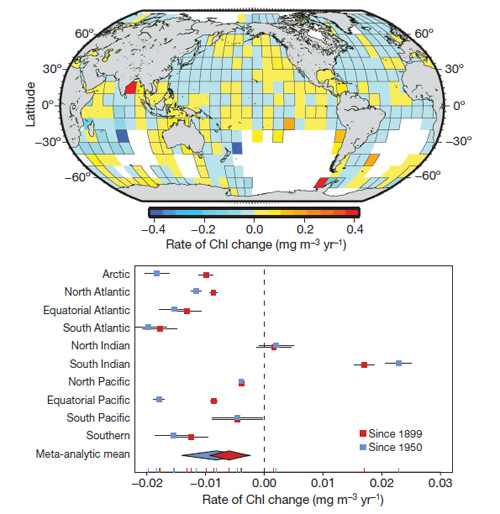 It’s not just the phytoplankton – Tittensor found that water temperature dictates the fate of all manner of marine species right up the food web, including animals like whales that are 10 billion times heavier. He studies 13 groups of plants and animals, including zooplankton, seagrasses, seals, billfishes, octopuses and sharks. On the whole, they were concentrated in predictable hotspots like the Caribbean, South-east Asia and the Australian coast. Ocean wanderers like whales, squid and tuna were found at temperature latitudes away from the equator, while South-east Asia had the richest concentration of coast-lovers, like corals, mangroves and coastal fishes. As you might imagine, several factors influence the distribution of these diverse species. Some parts of the ocean are more productive than others, some are richer in oxygen, and some have more stable climates. Some species might react to specific geographical features like length of coastline, while others may be limited to specific areas because of their evolutionary history. But the only thing that explained the patterns of diversity in all 13 groups was the surface temperature of the sea. None of the other factors had quite the same impact. In general, warmer waters were more likely to be hotspots of diversity for marine species, with the exception of seals and sealions that are specially adapted to colder seas. But even with a census this big, Tittensor has merely glimpsed at the full panorama of ocean life through a keyhole. A more thorough survey would have to include groups that we don’t have a lot of data for, including deep-sea species, invertebrates other than cephalopods, bacteria and viruses. Meanwhile, the existing patterns are merely correlations and need to be checked at a more detailed, local level. Nonetheless, the results suggest that changes in ocean temperatures could have a big impact on the spread of oceanic species. For the moment, the blue parts of the planet have to contend with more immediate threats. Tittensor found that the areas that are richest in life are also those that are most heavily affected by human activity, including pollution, habitat destruction and overharvesting. And as Boyce showed, warming waters have already taken their toll on the phytoplankton at the base of the food web. The time to act has already come, if the future of our marine life is to be preserved. 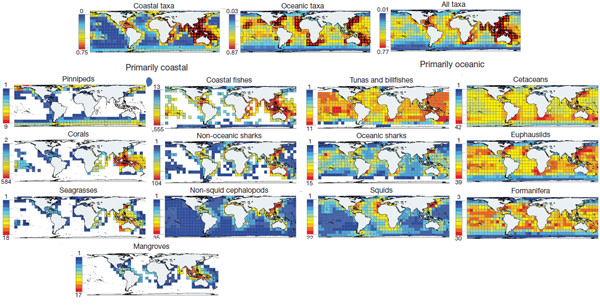