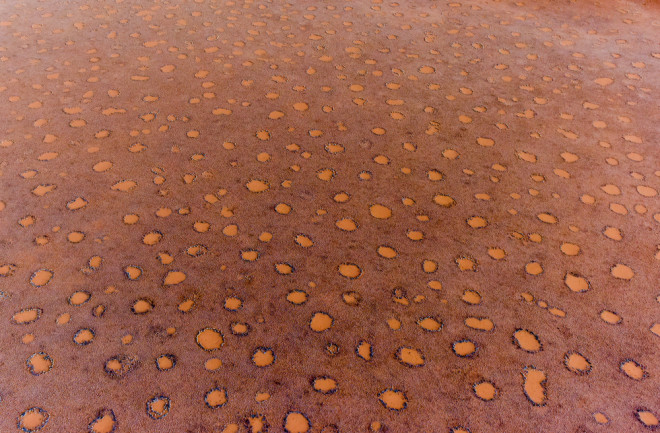 Fairy circles in Namibia. (Credit: Felix Lipov/Shutterstock) The mysterious fairy circles that form regular hexagonal patterns in the Namibian desert have long mystified researchers. Thousands of bare patches arranged in a grid and measuring anywhere from six to over a hundred feet in diameter speckle the desert throughout the country. A similar phenomenon was recently documented in Western Australia as well. To date, their origin is still unknown — the fairy circles are held to be the footprints of the gods by the native Himba, or the result of noxious dragon breath in another popular tale. Biologists are split into two separate camps regarding a scientific explanation for fairy circles. One line of thinking holds that sand termite colonies, found in Namibia, gnaw away at vegetation to form the circles. The other explanation is that the circles are emblematic of a struggle for resources in the arid desert. As plants fight to establish root systems, they end up pushing out surrounding vegetation, and the system naturally forms into a series of circular structures.

Let's Work It Out

A paper published Wednesday in Nature from researchers at Princeton and the University of Strathclyde in Scotland may offer a solution that makes everyone happy. Combining a computer model of fairy circle formation with field observations, they say that both theories are valid, but that the best explanation seems to be that both mechanisms are at play. They first ran their model with the assumption that termites are only factor, and a honeycomb patchwork of bare circles dotted their artificial landscape. They then added a competing root system, and not only did the the circles remain, but the model more closely resembled the real thing.

(Credit: Tilo G/Shutterstock) To confirm their experimental results, two of the researchers journeyed to the Namib desert in 2015, armed with a camera and a long pole. Using their simple setup, they snapped pictures of the fairy circles in various locations from above, and were able to confirm that the distributions of both the circles and the surrounding vegetation matched their model.

While heartening, their results aren't yet definitive. Just because they weren't able to rule out either factor doesn't mean that both are right. Unfortunately, fairy circles are rare, and take years to materialize, making observations of circle formation are difficult. They have been compared to the Mima mounds found primarily in the northwestern United States and the Heuweltjies that dot South Africa. Both natural erosion and burrowing animals have been blamed for those phenomenon, but solid evidence is lacking in both cases as well. As Stephan Getzin, an ecologist in Germany, points out in an email to the New York Times, sand termites are entirely absent from Australia, making their involvement a bit of a stretch. Nevertheless, Norbert Jürgens, the researcher who first put forth the termite theory in 2013 agreed with the research, saying in an interview with the Christian Science Monitor that he was "very pleased to see this publication because it's fully supporting the conceptual model that I proposed." More research comparing the Namibian and Australian fairy circles is needed to truly pin down the origins of these storied occurrences.