With rows of sharp teeth, this bird had a little more bite than modern birds of the same size. 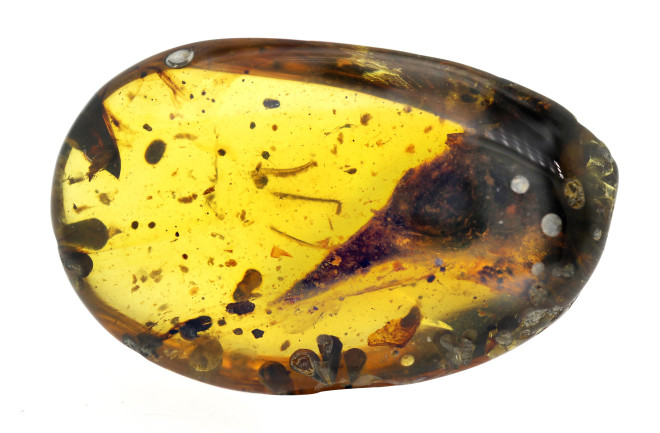 Editor's Note: The report discussed in this article was retracted from Nature on July 22, 2020.

The bee hummingbird is the tiniest living bird in the world. It weighs less than a dime, lays eggs the size of coffee beans and is often mistaken for a bee as is flits around pollinating flowers in its native Cuba. Ninety-nine million years ago, a similar-sized bird with rows of teeth on its beak — the Oculudentavis khaungraae — flew around, likely feasting on insects.

Researchers published a report in Nature this week documenting the first discovery of the bird’s skull in northern Myanmar. Trapped in a nugget of amber, this brain case likely represents the smallest dinosaur from the Mesozoic era found to date.

“You can hold it up in the light and see the skull in there so clearly,” says study co-author Jingmai O’Connor, a paleontologist at the Institute of Vertebrate Paleontology and Paleoanthropology in Beijing.

Dinosaurs dominated in this period of Earth’s history, and this well-preserved skull hints at what other tiny ancient species could appear in recovered amber.

A Rare and Delicate Find

Animals as tiny as this bird — its skull being only a third of an inch long — would normally be crushed by the weight of soil and sediment piling onto a carcass. That makes finding detailed rock fossils of small organisms exceedingly rare, O’Connor says.

And it’s not clear as to why only the head of this bird was preserved in hardened tree resin. O’Connor says the bird could have fallen into the goo headfirst, and the rest of the body was scavenged. It’s even possible the head fell off of the body as the bird decayed, as research into avian decomposition indicates that this happens.

Either way, the preservation process kept the skull in good shape for millions of years. “I thought it was incredible — this gorgeous, pristinely preserved little birdlike skull,” O’Connor says, recalling the first time she saw it. “I remember showing all my friends the photos.”

Close-up photos and CT scans helped the research team piece together what this bird’s entire body looked like, and possibly how it behaved. The team is sure they’ve found an adult skull in part because many of the bones have fused together, a developmental stage that indicates maturity.

The eye sockets look somewhat large for its cranium, but when the researchers compared the bird to its more modern relatives, its eyes are actually smaller than expected for the length of its head, O’Connor says. The lineup of pointy teeth on the beak — about 60 total — also suggests the bird dined on insects.

Some of the bones and features were unexpected for a bird species. Combined with its tiny size, the team thinks this species came about because of evolutionary pressures to get smaller, something that often happens on islands. “Miniaturization makes things strange,” O’Connor says.

As for which ancestral bird evolved into this peanut-sized rendition, it’s hard to tell. The fossil record still lacks documentation of a lot of organisms, O’Connor points out. Even the position the researchers gave this bird on the evolutionary tree might change as more specimens are unearthed.

Some of those ancient birds might come from future amber finds, but pose some ethical quandaries for researchers. Many specimens come from conflict zones and are harvested in dangerous labor conditions. O’Connor says that, to the best of the research team’s knowledge, the amber in their work is sourced from legitimate amber traders. However, future research could face barriers if tensions continue.

“These discoveries in amber are priceless and have the potential to excite people and get them interested in science, which can help people to better understand how they affect the planet,” O’Connor wrote in an email.