A Thousand Eyes Without a Face

Brittlestars, close relatives of the humble starfish, possess an amazingly refined optical apparatus that inspires stabs of envy among engineers at Lucent Technologies' Bell Labs in New Jersey. Joanna Aizenberg and her colleagues there recently discovered that the creature's entire body--a nonrigid armor made of crystalline material--is covered with perfectly shaped light-collecting lenses, each just half as wide as a human hair. "They are far beyond anything we can form using current technology," she sighs. 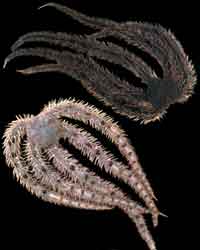 The thousands of lenses act together as one big eye--not unlike the compound eye of a fly--to focus light onto photoreceptor cells lying underneath. Although images don't form on every lens, the amount of light collected from different directions gives the brittlestar a rough image of its surroundings as well as a sense of the time of day. The creature's body even acts like a pair of sunglasses, darkening in bright daylight. Until now, engineers have only dreamed of such perfect microlenses, which could be invaluable in optical networking and microchip production. Aizenberg is inspired. "This is very clever engineering," she says. "We may be able to mimic it, borrowing from nature a design that has already been working for thousands of years."