A Surfeit of Salamanders: An Imagined Picture Book 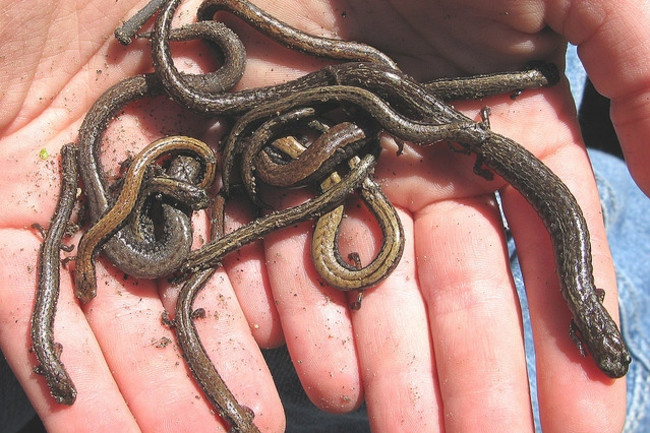 If ever there was a scientific study that deserved to be a children's picture book, this was it. Scientists belly-crawled through the forests of the Ozarks, flipping stones and looking for slimy things that wriggled away from them. They learned that the forest is secretly packed with salamanders in unfathomable numbers, as many as 10 times what earlier researchers had thought. The amphibians emerged as the hidden heroes of the woodland ecosystem. Let's imagine it. On the cover, an illustration of heaps of salamanders. They're multicolored and represent many species. The opening pages are an introduction to salamanders. Maybe one salamander in particular. Sally is too obvious, so let's say Solomon Salamander. Solomon is a southern redback salamander, or Plethodon serratus, an extremely common species in the Ozark forests. Like other salamanders, Solomon spends much of his time underground. He needs to keep his glossy amphibian skin damp. So when the weather is dry, he may burrow into holes and tunnels in the dirt, such as those left behind by his friend Ernestine Earthworm. He also likes to hunker beneath cool logs and rocks. Now we meet some scientists at the University of Missouri. They're shown scratching their heads while poking around in the woods or working in their labs. Because salamanders spend so much time out of sight, it's hard for humans to count them. The scientists wonder: how can they figure out the true number of salamanders in the woods? Ecologist Raymond Semlitsch and his doctoral student Katie O'Donnell trek into the forest. In a research area that's part of the Mark Twain National Forest in Missouri, they set up their experiment. They mark off 20 rectangular areas, each 5 hectares (about 12 acres) in size. Then the scientists scour their plots for salamanders. Working in one 3-meter-by-3-meter square at a time, they crawl along the ground, raking the leaf litter with their hands. (Illustration: a scientist's nose nearly in the dirt as she searches, with tiny insects springing out of her path.) They flip over rocks and logs as they encounter them. Whenever they find salamanders, they lift them gently from the dirt to be weighed and measured. (Illustration: a surprised-looking Solomon held aloft.) Nearly all the salamanders they spot—more than 98 percent—are southern redbacks. About 1 percent belong to a species with the less dignified name of western slimy salamanders. Even rarer than those are the long-tailed salamanders. The scientists search the same plots of land over and over and over, returning during the course of two years. Each time, they safely replace all the salamanders they've collected. Finally they return to the lab to crunch some numbers. By comparing the varying numbers of salamanders they've found at the same plots on different days, the scientists can build a model of salamander populations, as Semlitsch explains

. (Illustration: scientists peering at a computer screen.) The model estimates how many salamanders were missed on each visit because they were hiding underground. The researchers add other information to their model: when they visited each plot, how much sun and rain it gets, how steep it is, and so on. Using the data from the sites they studied, the computer can estimate salamander populations in other parts of the woods, too. (Illustration: computer sweating with exertion.) From all this information, the computer model finally tells the scientists what they want to know. How many salamanders are in the woods? The answer, according to the model, is between 1.88 and 2.65 billion salamanders

. That's within a district of the Mark Twain National Forest about 2,800 square kilometers in area. As the illustrations zoom in from the scale of the forest to the trees, we put those numbers in perspective: a little less than one P. serratus salamander per square meter. The numbers are two to four times higher than estimates made by other scientists in the 1970s. Those researchers, studying salamanders in the woods of New Hampshire, didn't account for amphibians hiding underground. And more recent studies of other salamander species have found up to 10 times more salamanders than the 1970s research. Now we see an enormous, teetering pile of salamanders. On a scale, they weigh in at 2,093.5 metric tons. That's the upper estimate for salamanders in this area of forest. This huge "biomass" is what the scientists are most excited about. It means salamanders are more important as a food source for other animals than previously thought. Those animals include the snakes, birds, and mammals that prey on salamanders, as well as the decomposers that break down their corpses. It also means salamanders are more important predators of insects; they may have a crucial role in controlling bug populations in the leaf litter. When it comes to amphibian conservation, the findings mean salamanders are worth our attention and protection. They have a huge role in the forest ecosystem, even though they mostly stay behind—or beneath—the scenes. Note: The edition of A Surfeit of Salamanders for mature readers will also include the part of the experiment where Solomon and a couple dozen of his friends are euthanized, cooked, and ground up to estimate their nutrient content. 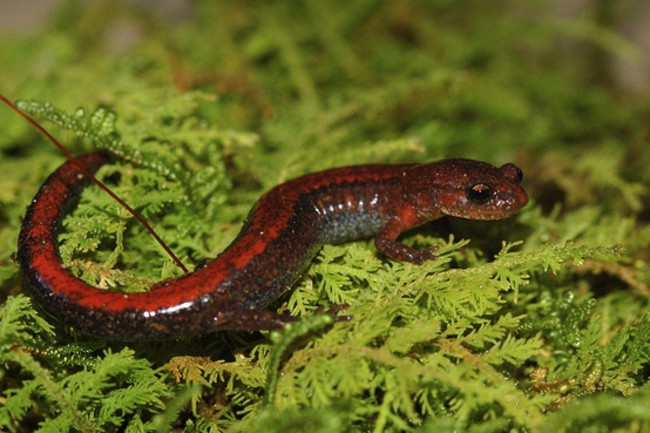