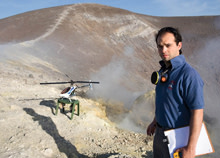 A small remote-controlled helicopter could help protect thousands of people living in the shadows of active volcanoes, according to a prize committee that awarded $100,000 to the helicopter's inventor. Scottish volcanologist Andrew McGonigle, who just won a Rolex Award for Enterprise, flies his prototype helicopter over Italian volcanoes like Etna, Stromboli, and Vulcano, checking for a mixture of gases that indicate an imminent eruption. (DISCOVER features McGonigle in the article "Up in Smoke," in the December issue.) Sulfur dioxide is pushed out of volcanoes as the magma rises within, and is routinely measured by scientists from afar. However, measuring carbon dioxide can provide a better early warning system, says McGonigle.

"The gases are telegrams for the earth's interior, especially the CO2 which is released 10 kilometres deep and which comes out a long time before the magma gets to the surface," he said [Telegraph].

Carbon dioxide is released from rising magma weeks or months before an eruption, which would give nearby residents ample time to evacuate. But a volcano's carbon dioxide emissions can't be measured from afar using ultraviolet spectrometers, as is done with sulfur dioxide levels, because overall levels of carbon dioxide in the atmosphere are very high, McGonigle explains:

"So the component that the volcano adds to [the background carbon dioxide levels] is, relatively speaking, next to nothing." ... In order to take the precise carbon dioxide measurements needed to tease out the volcano's contribution, vulcanologists have previously had to place gas sensors in the highly dangerous areas where the gas is released. In 1993, six vulcanologists died when Galeras, a volcano in Colombia, erupted while they were trying to take gas measurements [Nature News].

, says McGonigle. He plans to use the prize money to build his next prototype, the Aerovolc II, which will be bigger and loaded with more sensors, and will be able to range farther from its operator. Related Content: DISCOVER: The Remote-Controlled Helicopter That Predicts Volcanic Eruptions 80beats: Mini Helicopters Conduct Whale Check-Ups by Flying Over Blowholes 80beats: Helicopters Learn to Fly Themselves by Studying an Expert PilotImage: Rolex Awards/Marc Latzel