A Microwave Beam to Keep the Frost Away 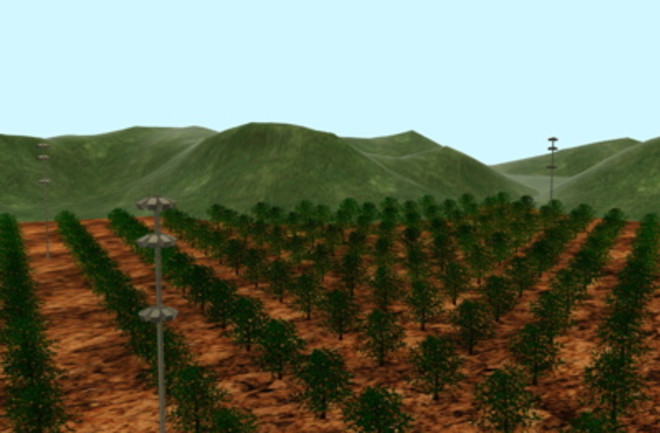 In Larry Niven's novel Ringworld, the alien Kzin attack humanity under the assumption that humans, having been at peace for years, had no weapons. But when the Kzinti attack, humanity uses communications and industrial lasers as formidable defenses that successfully ward off the invasion. In a reversal of that, Raytheon has taken a weapon, its Active Denial System, and used it as a heat ray to keep crops warm against a frost, a device called Tempwave. Don't remember the Active Denial System? That was Raytheon's non-lethal weapon designed to be fired at crowds. Using a microwave beam that penetrates 1/64 of an inch into the skin, the device makes people feel like they've suffered burns, but with no lasting effect. Now Raytheon has modified the technology to keep crops warm in the event of a frost. From atop a 25-foot tower, Tempwave broadcasts low-power radio waves into fields, causing water molecules to vibrate. Calibrated just right, the radio waves prevent fruit and vegetables from freezing when winter comes early. The device has already been tested as a proof of concept in a California vineyard, and it has the support of the Vineland Research and Innovation Centre, a Canadian agricultural research nonprofit. With a couple hundred thousand of those in the fields, farmers could be the first line of defense when the Kzinti try again. (Image courtesy Raytheon)