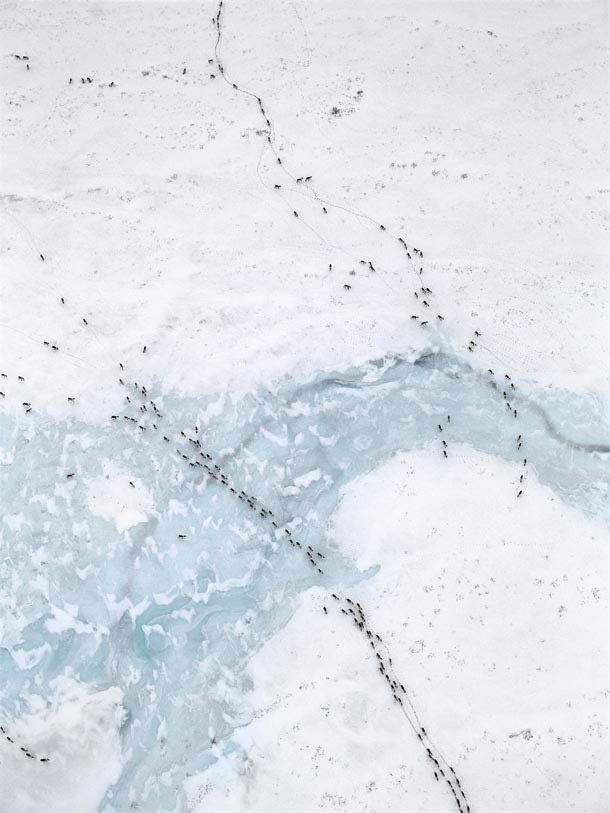 An exhibit opening this week at Los Angeles Contemporary Exhibitions in Hollywood, California addresses climate change through daily, personal experience. An artwork by Meschac Gaba, Pollution Business, documents women of Cotonou, Benin as they wipe the faces of drivers of taxi motor bikes with linen towels. The dark residue left on the white towels reveals the CO2 pollution in harsh relief. Artist Subhankar Banerjee created a photography and video installation, We are the ones who have everything to lose, on the Gwich'in people in Alaska. His photographs show the females of the Porcupine River caribou herds as they make one of the longest terrestrial migrations made by land animals. This migration connects fifteen Gwich'n villages in Alaska, Yukon, and Northwest Territories through subsistence food harvest. Banerjee says, "In the photograph we see pregnant female caribou from the Porcupine River herd migrating in early May over frozen Coleen River on the south side of the Brooks Range Mountains in the Arctic National Wildlife Refuge in Alaska, on their way to the coastal plain of the Refuge for calving. It is an aerial photograph. I flew with legendary bush pilot Walt Audi and Inupiat conservationist Robert Thompson in Walt's Cessna 206. I had taken the back door off; the outside temperature was around minus 35 degrees F with wind blowing at 50 mph." Banerjee's ongoing work in the Arctic began twelve years ago. Banerjee admits it challenged his expectations:

"I had thought and most people around the world think of the Arctic as a remote place disconnected from our daily lives. On the contrary, now I think of the Arctic as one of the most connected places on our planet. The connection is both celebratory and tragic. Hundreds of millions of birds migrate to the Arctic from every corner of the Earth, a planetary of celebration of global interconnectedness. Also, caribou, whales and fish migrate hundreds, and sometimes thousands of miles and connect indigenous communities of the Arctic through subsistence food harvest -- local and regional connectedness. On the other hand, industrial toxins migrate to the Arctic from every part of the planet making animals and humans in some parts of the far north among the most contaminated inhabitants on Earth. Also, climate change is wreaking havoc up there as the Arctic is warming at twice the rate as the rest of the planet. We are all connected to the northern landscape and we all have an obligation to ensure a healthy future for our northern neighbors -- humans and nonhumans."

The show, (Re-) Cycles of Paradise, is open to the public from Oct 25th to Dec 16th. Check the LACE website for the accompanying schedule of performances and events. Caribou Migration I, from the Oil and the Caribou series