A lack of taste – how dolphins, cats and other meat-eaters lost their sweet tooth 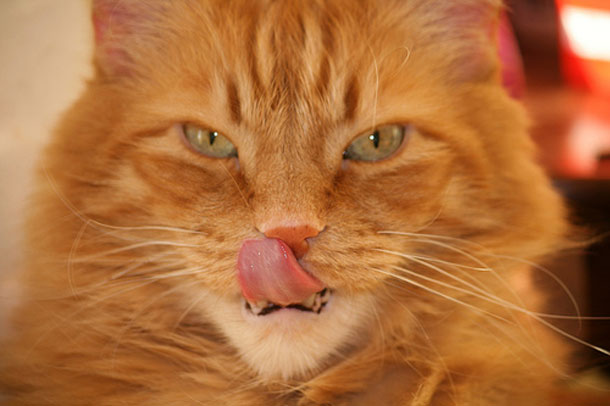 Imagine a world without sweetness, where you couldn’t taste the sugary rapture of cakes, ice cream or candy. This is what it’s like to be a cat. Our feline friends carry broken versions of the genes that build sugar detectors on the tongue. As such, they’re completely oblivious to the taste of sweet things. So are Asian otters. And spotted hyenas. Sea lions and dolphins too. In fact, Peihua Jiang from the University of Zurich has found that a wide variety of meat-eating animals can’t taste sugars. The genomes of these carnivores are wastelands of broken taste genes. Two genes are largely responsible for our sweet tooth – Tas1r2 and Tas1r3. They encode two proteins that combine to form a sensor, which dots our tastebuds and detects sugar molecules. In 2005, Xia Li and Joseph Brand showed that all cats, from house tabbies to wild tigers, carry a useless version of Tas1r2. Over time, it has picked up so many mutations that it has become genetic scrap. It’s a ‘pseudogene’, incapable of making a working protein. Now, Li and Brand have teamed up with Jiang and others to look at the same gene in a variety of other meat-eating mammals. They looked at a dozen species, and found that seven of them also have broken versions of Tas1r2. These include the Asian short-clawed otter, spotted hyena, spotted linsang (a beautiful tree-climbing civet), fossa (a Madagascan mongoose-relative) and three sea-going hunters – the sea lion, the fur seal, and the Pacific harbour seal. All of these species are exclusive meat-eaters. Like cats, they feast on flesh, and nothing else. And all of them had disabled their copies of Tas1r2 in different ways. This suggests that the ancestor of the carnivorans had a working sweet-tooth gene, which deteriorated independently in different branches of the family tree. Indeed, several carnivorans have working copies of Tas1r2, including the dog, ferret and giant panda. Jiang found five more: the aardwolf (a termite-eating hyena), Canadian otter, spectacled bear, raccoon, and red wolf. Unlike the members of Team Cat, these species sometimes stray from a meat-only menu. Taste tests confirmed the stories that the genes were telling. For example, the Asian small-clawed otter (with a broken Tas1r2) will drink from a bowl of sugary water as often as it will from a bowl of plain water. Cats show the same indifference, but the spectacled bear (with its working copy) clearly prefers the sugary drink. Jiang thinks that mammals don’t need to taste sweet things if they only eat a diet of meat. In such “hyper-carnivores”, the evolutionary pressure to keep a pristine sugar sensor dies away, and the gene in question is free to pick up crippling mutations. Things are even worse in many sea-going mammals. Jiang found that sea lions and bottlenose dolphins have bust versions of not just Tas1r2, but two others responsible for detecting umami, a taste often described as “savouriness” or “meatiness”. The dolphin also has ruined copies of 10 genes that pick up bitter tastes. And indeed, both dolphins and sea lions have very few taste buds in their tongues. These hunters swallow their food whole, and may have little need to taste their morsels first. Studies like these remind us how evolution is quick to jettison abilities that living things no longer need. But they also remind us that we’re only ever experiencing the world through a sensory keyhole. Other animals can see wavelengths of light or hear frequencies of sound that we cannot. We, in turn, can taste things that many predators can’t detect. What we sense is only a small fraction of all there is to sense. And that fraction has been shaped through evolution to best meet the demands of our lifestyle. Reference: Jiang, Josue, Li, Glaser, Weihua, Brand, Margolskee, Reed & Beauchamp. 2012. Major taste loss in carnivorous mammals. PNAS http://dx.doi.org/10.1073/pnas.1118360109image by Ducklover BonnieMore on evolution and broken genes: