A Jumping Spider that Hunts Leafy Greens, Not Juicy Bugs

A jumping spider that passes on eating ants in favor of leafy greens has just been described by scientists. The novel arachnid, named Bagheera kiplingi, is exciting because

it is the first-known predominantly vegetarian spider; all of the other known 40,000 spider species are thought to be mainly carnivorous [BBC News]

. The study was published in the journal Current Biology.

Found in Central America and Mexico, the order-defying jumping spider eats nutrient-rich structures called Beltian bodies, which are found on the tips of Acacia trees. Trees produce the bodies to feed ants that defend them, which is a textbook example of what’s called co-evolutionary mutalism, and one that B. kiplingi has evolved to exploit [Wired.com].

This odd behavior actually led to the species' discovery. Researchers in Mexico stumbled upon the jumping spider near an acacia plant

Despite a primarily veggie diet, B. kiplingi actively hunts its green prey, which sounds bizarre, since the leaves can't run away.

first sits and stalks its target before it dodges through the ant defenses, snatches a Beltian body, and flees to safety.

leaf that was crawling with ants. The researchers expected the spider to leap down and feast on ants, but

—in this case, of larval ants. Also surprising, B. kiplingi males care for their eggs and young—another trait that's entirely unheard of among arachnids. Scientists now want see if there is any link between the spiders' diet and parenting behavior. Related Content: 80beats: A “Sadistic” Spider’s Unusual Mating Habits Are Tough on the Female 80beats: Metal Injections Make A Spider Silk that Spiderman Would Envy 80beats: Female Tarantulas Devour Extra Suitors to Benefit Their Young

instead, to [their] surprise, the spider ... darted around the ants and plucked off one of the leaf tips [New York Times]

In their scientific report, the researchers include a molecular analysis of the spider's body, which shows that, like some less-committed vegetarians, the spider may indulge in the occasional meaty side dish 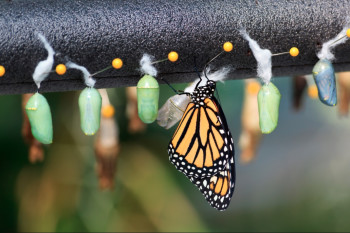