A Hubble Telescope Pointed Into the Ground

A mobile seismic observatory, rolling out  slowly across the continent, is piecing together  a startling picture of what lies beneath. 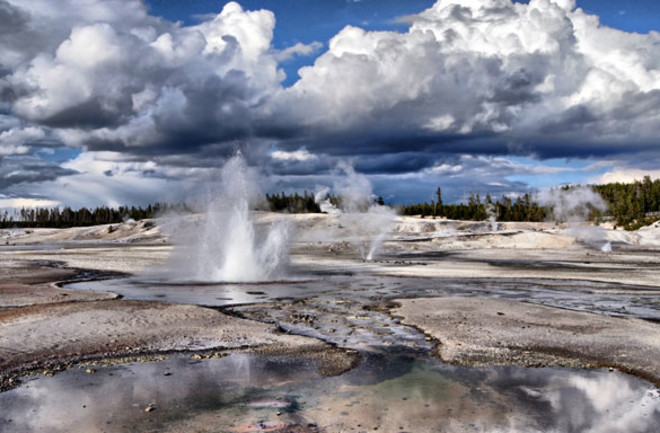 Dean Lashway climbs out of a freshly dug pit on an alpaca farm in eastern Tennessee. The equipment he has just installed is listening intently. At the bottom of the six-foot hole is a seismic sensor that records vibrations from around the world. Soon it will pick up the thud of a vault lid closing, the dull patter of dirt being shoveled on top, and the drone of Lashway’s van driving off. As human activity fades, the sensor will be left to eavesdrop on the crash of distant ocean waves, the rumble of faraway storms, and above all the quiver of nonstop mini-earthquakes—Earth’s constant seismic hum.

The seismograph is one of some 400 that make up the Transportable Array, a network of sensors that has been working its way across the country since 2004. From its initial installation along the West Coast, the array has been repeatedly uprooted and relocated farther east. Today it covers a 400-mile-wide swath from Minnesota to Florida. Each sensor records vibrations at its post for two years, relaying data to a computing facility at the University of California, San Diego, until a crew digs up the instrument and transports it to the next site. When the array reaches the Atlantic seaboard next year, it will begin collecting the final batch of data needed to complete the first high-resolution, 3-D map of the 50-mile-thick North American continent. Initial results are already helping scientists understand the processes that shape continents and tear them apart, so they can reconstruct our planet’s geologic history and predict its future.

The epic Transportable Array survey is the work of the Incorporated Research Institutions for Seismology, or IRIS, a consortium of more than 100 universities. IRIS president David Simpson and colleagues first conceived of the array in 1993. “The Hubble telescope had just gotten going,” Simpson says, “and everyone was talking about what the next big project should be.” Seismologist Guust Nolet suggested a giant, inward-looking seismic telescope to survey our own world, and the idea took off. In 1999 the National Science Foundation agreed to provide $91 million in funding. Starting in California, where the project could take advantage of existing seismic stations, students at IRIS-affiliated universities fanned out to get permission from landowners to install sensors on their property. The explosion of cellular communications in the early 2000s then eased a logistical hurdle by supplying a nationwide network that could transmit IRIS survey data in real time.

Although the Transportable Array does not create pictures in the conventional sense, it is providing amazing vistas of the Earth’s interior all the same. Matt Fouch, a geophysicist at the Carnegie Institution for Science in Washington, D.C., says that for decades scientists have struggled to make sense of the jumbled geology of the Pacific Northwest, the land of the soaring Cascade range and the explosive Mount Saint Helens. But without being able to peek at a big picture that puts everything in context, “you can’t know how the parts fit together,” he says.

One puzzle in the Northwest is the Yellowstone hot spot, a 300-mile-wide region dotted with thousands of seething geysers and vents. Since the 1970s, prevailing opinion has held that Yellowstone’s activity is driven by a giant plume of hot material rising up from the mantle, the thick middle layer of Earth’s interior. But new images from the Transportable Array are calling that idea into question.

Where researchers expected to find a large mantle plume, the map of the geologic structure beneath Yellowstone instead seems to show a ghostly fragment of an old tectonic plate—a former chunk of Earth’s rocky shell—lodged under the western United States, right near the Yellowstone hot spot. The fragment is one of many that probably broke off from an ancient section of crust called the Farallon plate, which began forcing its way under North America, moving from west to east, more than 200 million years ago—around the dawn of the dinosaurs. Fouch thinks Yellowstone’s restless activity is driven not by a giant mantle plume but rather by mantle material being pushed around the edge of the stranded Farallon fragment. Not all of his colleagues agree, but “we finally have the whole picture,” he says, “so we can argue meaningfully about what it means.”

Is the East Coast Headed for a Crack-Up?

Engineers continuously relocate Transportable Array stations, leapfrogging sensors from the array’s trailing western edge ahead to the eastern front line. As the project marches to the coast over the coming months, it may shed light on another long-standing mystery. Beneath the eastern United States, scientists have observed an area where seismic waves travel more slowly than expected. Suzan van der Lee, a geophysicist at Northwestern University, thinks the slowdown might be due to water released by another fragment of the Farallon plate. If so, she suspects that the liquid could eventually weaken the crust beneath the Atlantic Ocean near the continent’s edge, causing it to break off from North America and sink back into the mantle. Within a few tens of millions of years, that process could make the East Coast as geologically active as the West Coast is today.

Van der Lee will have to wait for the Transportable Array survey to be complete—which should happen around 2015—to put her theory to the test. But after a long wait, real answers could be at hand. “For all the hypotheses proposed over the last two decades,” Fouch says, “we’ll finally be able to start figuring out which were right and which were wrong.”

On the alpaca farm, Lashway—who works for Honeywell, the company contracted to install and maintain the array’s sensors—is doing his bit to make that happen. “Take your last look,” he says as he prepares to bury the station in sand. “It won’t see the light of day for two years.” In the meantime, though, it’ll be in touch.

Emily Elert is a freelance journalist and a coauthor of Global Weirdness, a book from the foundation Climate Central, published in July.