A Fishy Critical Mass Makes Millions of Herrings Swim Together 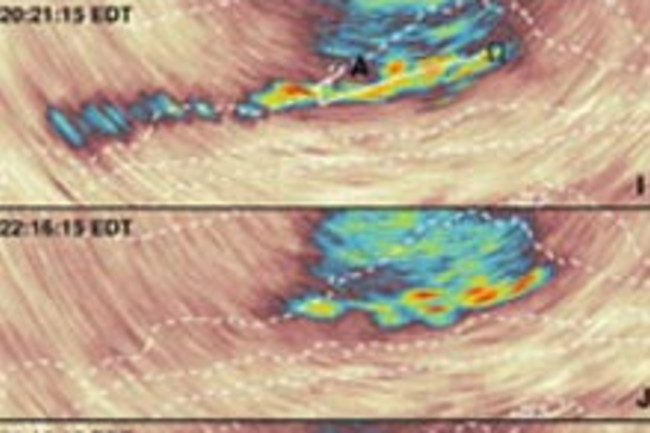 How do hundreds of millions of fish decide to join ranks and take a swim together? That's the question researcher Nicholas Makris and his colleagues set out to answer in the shallow waters of Georges Bank, about 60 miles off the coast of Massachusetts. It was already known that on autumn evenings herrings emerge from the deep waters where they safely spend their days, form a massive shoal, and venture into the shallows to spawn.

Now, watching that shoal form in real time with an advanced new acoustic technology, researchers have discovered that the shift from a disorganized scattering of fish to a highly synchronized shoal takes place in mere seconds when the fish reach a critical mass; the signal spreads rapidly through the ranks to form a shoal that can be 12 miles across. Says Makris:

At first herring mill around in deeper water without much order, but around sunset some little clumps form that seem to set off a chain reaction of organization. When fish drawing closer to each other reached a critical density — at least 0.2 fish per square meter — herring began to close ranks more tightly to form an orderly mass swimming together [Science News].

Once the shoal begins to coalesce, the behavior spreads through the group faster than a fish can swim--like the wave in a sports stadium, Makris says. The study, published in Science, was made possible by a new acoustic system called OAWRS, for Ocean Acoustic Waveguide Remote Sensing, which can detect fish shoals across broad swaths of the ocean. While traditional sonar systems use quick flashes of high-frequency sound to take snapshots of small patches of the ocean, the OAWRS system sends low-frequency sound waves to scan an area the size of Massachusetts every 75 seconds.

This, says Professor Makris, is a vast improvement over conventional techniques, which Makris compared to "watching one pixel on a movie screen" while the new technology allows you to "see the entire movie" [BBC News].

Related Content: 80beats: The Wisdom of Crowds… of Stickleback Fish DISCOVER: The Most Important Fish in the Sea explains why menhaden matter