A Goffin's cockatoo in Vienna uses tools to fetch nuts beyond reach. 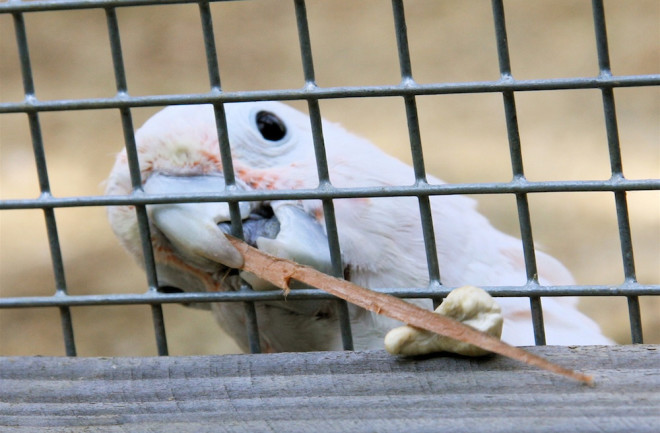 After prying a splinter of wood from the frame of his cage, Figaro uses it to reach a cashew.  (Credit: Alice Auersperg/University of Vienna)

The elite club of tool-making animals has a new member: a Goffin’s cockatoo named Figaro who lives in an aviary west of Vienna. After witnessing Figaro use a stick to retrieve a pebble, biologists placed a cashew outside his cage, just beyond his reach, and filmed what happened next.

The bird chewed off a 2½-inch splinter of wood from a beam in his aviary and used it to rake the nut toward him until he could grab the treat through the wire mesh with his beak. The trick, which took him about 25 minutes the first time, was no fluke, the researchers found: Figaro repeated the same strategy in nine out of 10 trials.

Many animal species use tools — otters crack oysters with rocks, octopuses build coconut-shell shelters and monkeys use stones to crack nuts — but few have been observed sculpting their own equipment out of raw material, as Figaro did.

New Caledonian crows also make tools, a skill that allows them to sustain their protein-dependent diet. But there is no obvious adaptive pressure for Goffin’s cockatoos to use tools, and the ability to do so may be a sign of general intelligence rather than a specific adaptation, says Alice Auersperg of the University of Vienna, who led the study.

Are Goffin’s cockatoos an exceptionally intelligent species, or is Figaro just a unique individual, an Einstein among bird brains? “Although this is a remarkable innovation, I do not believe that he is an animal genius,” says Auersperg. While none of his cagemates has figured out his technique, they have sometimes outperformed him in other cognitive tests. Auersperg’s group is continuing to test other birds, investigating whether they, too, may have an “aha!” moment.

[This article originally appeared in print as "Crafty Cockatoo."]