A Category 5 Landfall For Hurricane Felix 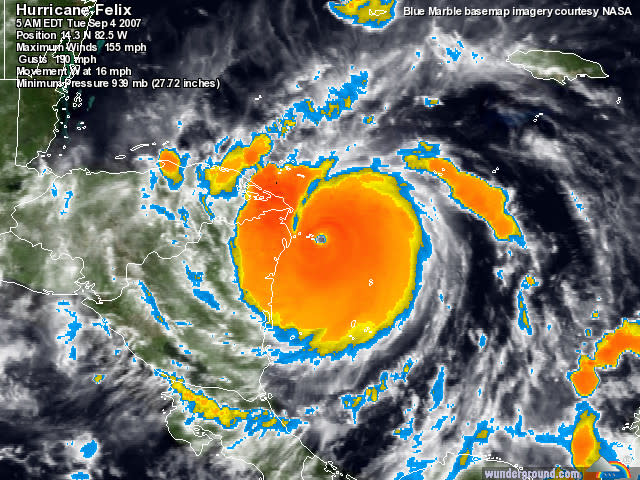 Felix has restrengthened overnight, and it's going to hit just as hard as Hurricane Dean did two weeks ago--140 knots, or 160 mile per hour sustained winds. Damage at the coast south of the Honduras-Nicaragua border will be potentially catastrophic, but what may be even more worrying is inland rainfall. Meanwhile, what a start the 2007 Atlantic hurricane season is off to: The first two storms to reach hurricane strength have also reached Category 5 hurricane strength, and furthermore, have made landfall as Category 5s. We started the year with just three storms on record having hit as full Category 5s in the Atlantic basin, and none since 1992's Andrew. We will end it with at least five having done so--and two in the space of two weeks. CORRECTION: As in the next post, I was wrong about how many recorded Cat 5 landfalls there have been in the Atlantic basin due to a simple confusion. There have been 13, not 5.