A Career Among The Finches 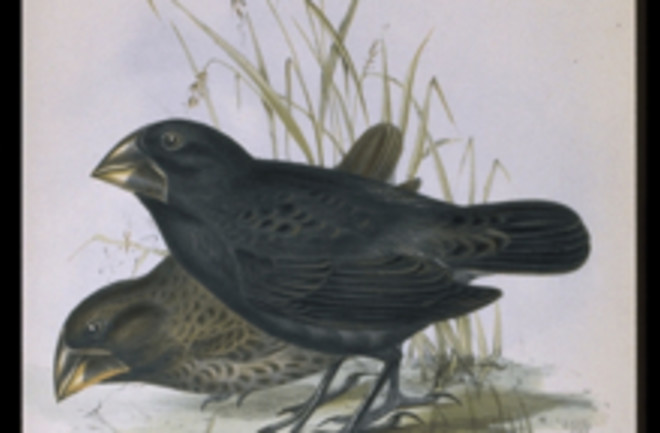 I just got back from a pretty remarkable lecture by the husband-and-wife team of Peter and Rosemary Grant. The Grants started studying Darwin's finches on the Galapagos Islands in 1973, and they made some of the most detailed studies of evolution in the wild ever carried out. Their adventures were chronicled 14 years ago by Jonathan Weiner in the Beak of the Finch, which won the Pulitzer Prize. But the Grants did not stop. They continued to observe the birds evolve, and make fascinating new discoveries. In 2002, I wrote an article on what they'd learned after some three decades of research. Six years have passed since then, and at today's lecture I learned that they retired from Princeton just last month. But apparently they're still going back to the Galapagos. So their lecture today was not a summing up, but yet another status report. In precisely one hour, they ripped through 35 years of research on natural selection and the origin of species. These were, of course, the obsessions of Charles Darwin, and it was the finches of the Galapagos Islands that helped him develop his theory of evolution. The Grants returned 114 years after the publication of the Origin of Species, and also after the subsequent discovery of how to measure natural selection with statistics. Darwin's finches, the Grants realized, would be a good group of birds in which to study how natural selection takes place, and how new species arise. They arrived a few million years ago on the islands from the mainland, and have since evolved into 14 species. On many of the islands, they still enjoy a relatively pristine life, and so far as anyone knows, none have become extinct since human contact. Since they arrived, they've evolved a wide range of beaks, from giant plier-like forms to slender needle-nose ones. The Grants have some clues to how these different beaks evolved--starting from within. Working with Harvard experiments on genes that build embryos, they found that a couple genes have a major effect on the shape of beaks. A gene called Bmp4 is active in different patterns in different beak shapes. In large, deep beaks, it's active sooner, in a wider patch of cells on a bird embryo's face, and makes more proteins. When the Harvard researchers mimicked the differences in Bmp4 activity in chicken embryos, they produced a similar range of giant and shrunken beaks. The Harvard team found that a different protein, called calmodulin, influences how pointing the beak gets. The more calmodulin in a species, the pointier the beak. These kinds of differences between Darwin's finches had to have evolved after their ancestors arrived on the Galapagos Islands. The Grants predicted that certain variations would be favored by natural selection. As a population of birds spread from one species to another, certain variations would be favored, because birds that carried them would be able to get more food. After hundreds of thousands of years, the birds from one island might arrive on another one, where they would compete with the resident finches. The Grants expected that the two populations might then evolve to become different from each other, because the ones that avoided competition would do best.