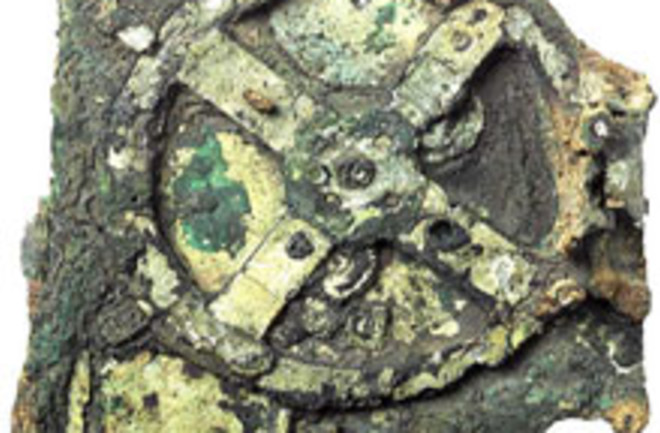 A bronze and iron "computer" that the ancient Greeks used to keep track of astronomical phenomena was also a sophisticated calendar that set the dates for the Olympic games, researchers say.

The ancient Olympic Games, which marked the start of a four-year timespan called an Olympiad, began on the full moon closest to the summer solstice, which meant calculating the timing required expertise in astronomy [Reuters].

The device is named the Antikythera Mechanism; it was discovered over a century ago in a Roman shipwreck off the tiny island of Antikythera, north of Crete. The mechanism, which was built around 100 B.C., had been reduced to a collection of bronze fragments and gears by its long immersion, but a new analysis has revealed inscriptions beneath the corrosion that name the games of the Olympiad cycle, including "Olympia." The purpose of the device was a mystery until 2006, when researchers examined the fragments with x-ray tomography, a technique similar to the CT scans used in medicine.

They concluded that the device originally contained 37 gears that formed an astronomical computer. Two dials on the front show the zodiac and a calendar of the days of the year that can be adjusted for leap years. Metal pointers show the positions in the zodiac of the sun, moon and five planets known in antiquity. Two spiral dials on the back show the cycles of the moon and predict eclipses [Los Angeles Times].

The latest imaging results, which are reported in the journal Nature [subscription required], revealed not only the names of the Olympiad games on a small dial, but also the names of the 12 calendar months used in the Greek city-state of Corinth and its colonies. These findings suggest that the device may have been constructed by one of the followers of Archimedes, the fabled astronomer and inventor.

Archimedes, who lived in [the Corinthian colony] Syracuse and died in 212 B.C., invented a planetarium calculating motions of the Moon and the known planets and wrote a lost manuscript on astronomical mechanisms [The New York Times].