96. Voyage to the Bottom of the Sea

A high-tech sub and its famous pilot explore the little-understood world of the deep ocean floor. 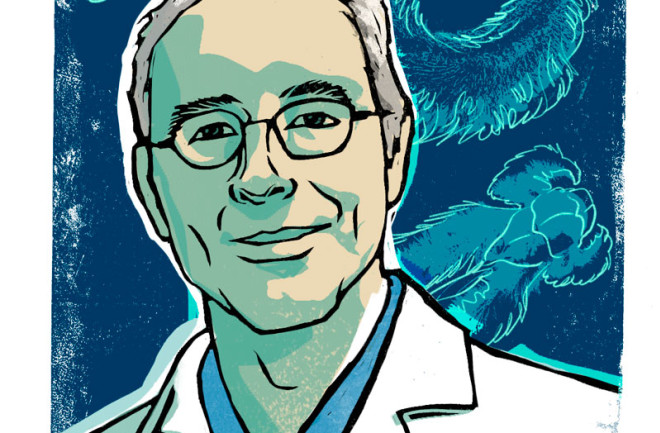 In 2011 marine microbiologist Doug Bartlett and his colleagues got a high-profile visitor at the Scripps Institution of Oceanography: director and part-time underwater explorer James Cameron, who outlined his plan to dive the Mariana Trench in his high-tech sub, Deepsea Challenger. Bartlett signed on as chief scientist, agog at the chance to collect microbes from the secluded depths.

On its first expedition this past year, the sub made 11 dives, including the record-breaking trip that made Cameron the first solo traveler to visit Challenger Deep, the bottom of the trench at 35,000 feet. DISCOVER senior associate editor Jennifer Barone spoke with Bartlett about the science behind the plunge.

A pair of explorers reached the Challenger Deep in a bathyscaphe back in 1960. Why go again?

Jacques Piccard and Don Walsh had very limited capabilities. They were there only about 16 minutes, looked around, and came back. There’s so little known about the life that exists in deep ocean trenches. It’s extraordinarily rare to have a human presence there. Far more people have walked on the moon.

What did you hope to learn from James Cameron’s dive?

There are so many questions about the pelagic [water-dwelling] and benthic [seafloor-dwelling] life-forms: their adap­tations to darkness, great pressures, and low temperatures. We wanted to collect samples of microbes in these extreme environments, culture them, and then get DNA and look at their genomic properties. We also wanted to collect animals from down there.

Deepsea Challenger was equipped with cameras to record his journey along the bottom. What was it like?

The light, silky gray sediment looked…sterile is too strong a word, but there were a few small, sparse crustaceans and a few sea cucumbers. Initially Jim followed a track we think was made by Kaiko [a remotely operated vehicle] many years ago. It was surreal that there was so little fluid flow, so little change down there, that you could still see that track.

The sub scooped up lots of microorganisms from the Mariana Trench. How are you studying them?

We have tens of thousands of microbial cells. We’ve been able to work with colleagues to sort out individual cells and begin to analyze their general genome characteristics. We’re getting information on their diversity, which we’ll use to decide which genomes to sequence in full.

What was the most exciting moment of the expedition?

To me it was Jim’s very first dive of the set, a deployment in the New Britain Trench, a nearby trench 30,000 feet deep. It was in the evening in February. We all crowded around the video monitor, watching recorded video from Deepsea Challenger, and it looked like a scene from 2001, seeing this striking green sub in a vertical position.

We had also sent down an autonomous lander with the sub that had bait attached, and that bait was starting to attract animals—mostly amphipods and isopods, which are small crustaceans. It was just magical. To be out there, and to see the film from the sub and get the sediment samples it collected—it just brought home that all this hard work had really paid off. And to be involved in recovering samples and data that are so rare and incredibly valuable, it was a once-in-a-lifetime opportunity.