The quickest out of the gate, angiosperms dominate the plant world. 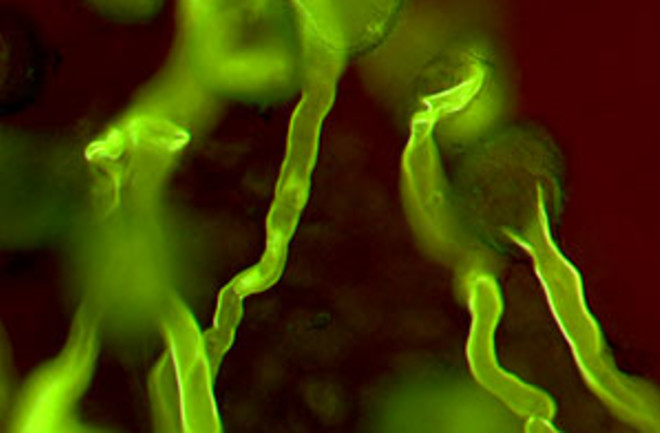 Tubes from pollen, headed for an egg cell. | Image courtesy of Joseph Williams

There are an estimated 270,000 known species of angiosperms, or flowering plants, but only about 900 species of gymnosperms, which are nonflowering plants such as conifers, cycads, and ginkgoes. The secret to the dominance of angiosperms may lie in the mechanics of fertilization, according to a recent study by Joseph Williams, an evolutionary biologist at the University of Tennessee.

Williams analyzed the rate of growth of pollen tubes, which transport sperm from pollen into a plant’s egg cell. In gymnosperms, wind deposits a pollen grain on an exposed egg cell, and then the pollen tube—growing at the slow rate of 20 micrometers an hour—releases an enzyme that destroys any tissue blocking the sperm’s entrance into the egg cell.

In early angiosperms, a different and much faster mechanism evolved. Instead of eating away tissue, the pollen tubes secrete a sugar molecule called callose, which forms thin walls for the pollen tube. The thin walls let the pollen tube grow between cells, so the tubes can snake through tissue at speeds of 80 to 600 micrometers an hour. Williams contends that these innovations took hold at least 125 million years ago and made it possible for early angiosperms to evolve more flexible and sheltered modes of fertilization, including ovaries containing egg cells deep inside the plant.