84. Kiss of the Cretaceous Spider

An ancient wasp narrowly escaped a spider attack, only to be coated in amber. 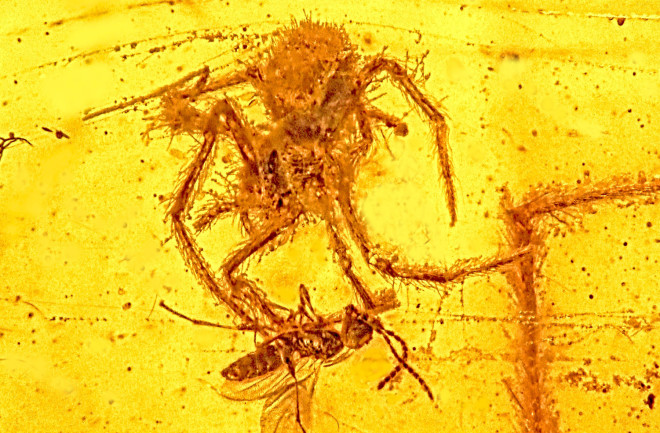 One hundred million years ago, a young spider bore down on a wasp ensnared in its web. Just seconds before the captor made a meal of its captive, a drop of tree resin engulfed and smothered them both. The resin eventually became a hunk of amber that was unearthed in the Hukawng Valley of Myanmar. Inside, perfectly preserved, is not just this haunting tableau, but also the leg and part of the body of an adult male spider that had the bad luck to step in the same resin globule. "It’s a once-in-a-lifetime piece," says George Poinar Jr., professor emeritus of zoology at Oregon State University, who described the find last year in the journal Historical Biology. "The fact that there’s also a male in this web shows that these were social spiders. It’s a rare event."