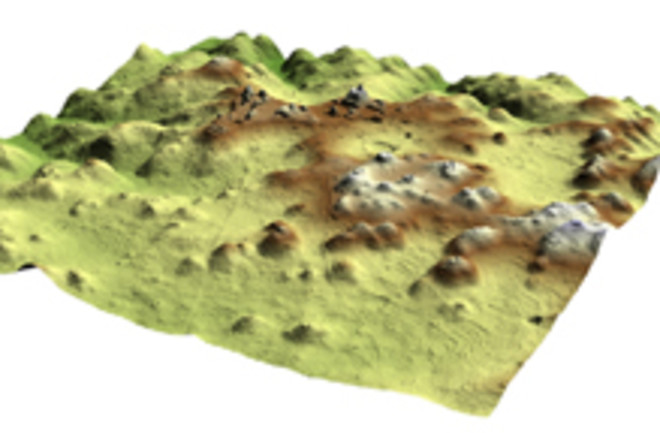 Sometimes you have to change your vantage point to really see something. The New York Times today reports on the work of Diane and Arlen Chase, who spent more than 20 years cutting through the Central American jungle to survey the Ancient Mayan city of Caracol in present-day Belize. But when they were turned on to the possibility of using flyover missions equipped with laser technology that could see to the jungle floor, their research accelerated dramatically.

In only four days, a twin-engine aircraft equipped with an advanced version of lidar (light detection and ranging) flew back and forth over the jungle and collected data surpassing the results of two and a half decades of on-the-ground mapping, the archaeologists said. After three weeks of laboratory processing, the almost 10 hours of laser measurements showed topographic detail over an area of 80 square miles, notably settlement patterns of grand architecture and modest house mounds, roadways and agricultural terraces [The New York Times].

Given such dramatic results, you might think the scientists would have started working from above earlier. After all, learning by bouncing lasers around isn't new: Satellites have measured the Antarctic ice

by reflecting lasers of the sheet and back into space, then measuring how long it took. Scientists have bounced lasers off reflectors that U.S. and Russian moon missions left behind

, measuring the moon's slow progression away from the Earth. But previous laser measurement techniques suffered when applied to archaeology, and especially trying to see through the thick jungle. Even earlier lidar efforts suffered from poor resolution.

At first, Payson D. Sheets, a University of Colorado archaeologist, was not impressed with lidar. A NASA aircraft tested the laser system over his research area in Costa Rica, he said, "but when I saw it recorded the water in a lake sloping at 14 degrees, I did not use it again." [The New York Times].

Because of that failure, Arlen Chase tells DISCOVER, many archaeologists didn't think much about lidar for a while. But, working with biologist John Weishampel, the Chases used a new-and-improved method of lidar called "swath mapping," in which "you get overlaps on the pass-throughs," Arlen Chase tells us. As a result, the team was able to get 20 data points per square meter over the entire Caracol area. "It was the first time it was done on this big an area," Arlen Chase says. "No one knew if it would work." But by using this technique, plus doing it during the dry season when there was less prevalent foliage, the team got these great images. According to the Chases, the city of Caracol thrived between about 550 and 900 A.D. And with the size of the city that aerial measurements were able to take, they say 115,000 people could have lived there during its peak.

“Finally, we have a nondestructive and rapid means of documenting the present ground surface through heavy vegetation cover,” Dr. Sheets said, adding, “One can easily imagine, given the Caracol success, how important this would be in Southeast Asia, with the Khmer civilization at places like Angkor Wat” [The New York Times]

Related Content: 80beats: Found on the Moon: A Soviet Laser Reflector That Was Lost for 40 Years