3-for-1 Fossil Find a Windfall for Paleontologists 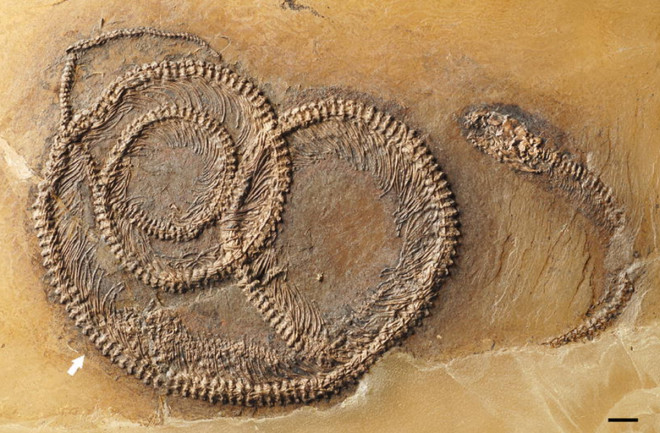 An image from the study showing the juvenile snake that ate a lizard that ate an insect. The arrow points to tip of the lizard's snout. (Credit: Krister T. Smith) It's not often that paleontologists uncover a fossil that reveals what its dinner ate for dinner. Working in Germany's Messel Pit, a prehistoric volcanic lake, researchers found an insect inside of a lizard inside of a snake (a snalizect?), all preserved for posterity in ancient sediment. It's essentially a prehistoric turducken, although not one you're likely to serve up at Thanksgiving dinner.

This particular example of fossil-ception let researchers peer into a 48-million year old food chain, and bolsters theories about the dining habits of this particular species of snake, likely belonging to the genus Paleopython. Much like their boa constrictor cousins, it was thought that these ancient snakes altered their dietary habits as they grew up, shifting from smaller lizards and amphibians to mammals, birds and other reptiles, according to National Geographic.

An interpretive drawing of the shapes of the fossils overlaid on the photograph. The snake is white, the lizard is orange, and the insect is blue. (Credit: Krister T. Smith) Finding this lizard, an extinct species of stem-basilisk, inside of a juvenile snake confirms that the species did indeed dine on smaller reptiles when they were young. The insect inside of the lizard evaded classification, although it's shimmering, iridescent shell was still visible. The researchers published their findings last month in the journal Palaeobiodiversity and Palaeoenvironments.

The Messel Pit has yielded a number of important finds over the years due to the excellent preservation of the fossils within. The pit was a volcanic lake during the Eocene epoch, some 56 to 34 million years ago. The lake was toxic at deeper levels, and creatures that swam too far down would perish and sink to the lake bed, where they were preserved for ages. Other notable fossils from the lake include bats and horses, as well as two turtles caught in the midst of love-making. Researchers often peer into the digestive tracts of fossils to find out what they were munching on millions of years ago. Doing so provides important information on not only their diet, but their habits, range and role in the broader ecology of their time. It's not often that these fossilized snapshots encompass three trophic levels, however — the only other known instance is of a fish inside an amphibian inside a shark.