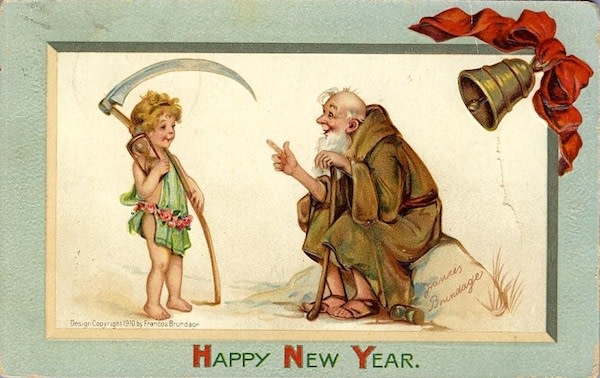 In 2011, the Loom reached its eighth birthday. Thanks to everyone who's paid a visit or become a loyal reader in that time. With the year coming to a close, I spent a little time this week perusing the Loom's archive, reflecting on the things that obsessed me during 2011. More than many years, this one reminded me just how huge science is. Even if you limited yourself to the most important stories of this past year, there was just too much to keep up with. (Here'sDiscover's top 100 picks.) As a science writer, my focus is biology, but that didn't ease my year-long case of head-spinning. The anchors that kept me from spinning away completely were the very small and the very complicated. At the small end of the spectrum were, among other things, the bacteria that call us home. Like every year, 2011 saw outbreaks, such as the E. coli that sickened thousands in Germany. But now that we can read the genomes of these killers, as I noted in

we can see how chillingly fast new pathogens can evolve. But the good germs also gained more recognition in 2011. The science of the microbiome is blooming at an astonishing pace, as you can see in the map I created for the September issue of Wired. As I got more familiar with the microbiome, it became clear to me that scientists won't be able to handle its complexity without thinking like ecologists. I made that point in a talk this spring called "The Human Lake," which I turned into a blog post in April. (I was delighted when it was selected as one of the best pieces of 2011 by The Browser and Longreads, and was picked to be including in the 2012 edition of Open Lab.) The microbiome, I predict, is going to become very intimate in years to come. It's a strangely thrilling experience to discover 53 species of bacteria living in one's belly button, as I found out this year. In the future, doctors may check our bug types just as they check our blood types today. But all this new knowledge about the microbiome will bring us unexpected ethical quandaries, some of which I discussed in December in the New York Times. Bacteria may be small, but they're positively plus-sized compared to viruses, the subject of my bookA Planet of Viruses, which came out in May. (You can read excerpts in Audubon and i09.) Working on the book opened my eyes to just how abundant, diverse, and powerful viruses are--a point I tried to get across in the talks I gave in the spring. The two that I was happiest with were an interview on Science Friday on NPR, and a talk I gave at the Long Now Foundation in San Francisco. As always happens when I write a book about a fast-moving field, the science of virology offered up lots of surprises after the book came out--such as the biggest virus ever, a possible ancestor of hepatitis C in dogs, and signs of a battle between viruses and bacteria in our mouths. When the movie Contagion came out in September, I took a look in Slate at how realistic its story of a new world-wide pandemic was. I found it real enough to be very scary. And in an eerie bit of timing, this fall scientists developed a strain of bird flu that some researchers worry could make the movie a reality. At the other end of the spectrum from bacteria and viruses is the human brain, those 100 billion neurons that make the universe aware of itself. There seems to be no end of revelatory research coming out of neuroscience and psychology. At the World Science Festival, I talked with three scientists doing extraordinary work on the mystery of sleep (you can watch the video here). In my own stories, I explored genes for language, teen brains, music in the brain, the neuroscience of smiles, how our brains make us capable of both war and peace, and the minds of Neanderthals. A lot of the pieces I wrote first appeared in the New York Times or magazines, but some of them have gotten a new lease on life. I published a new ebook in December,

nd my feature on the possibility of uploading our brains to achieve immortality was selected for The Best of American Science Writing 2011. In 2011, it wasn't just new science that was in the news. The nature of science was, too. Over the course of 2011, some high-profile papers came under fierce criticism, including arsenic-based life and a link between viruses and chronic fatigue syndrome. These studies prompted a debate about how science gets done in the first place, and how some of it then gets "de-discovered." I pondered the nature of de-discovery in the New York Times in July, and the emergence of a more transparent discussion of science in Slate. A lot of that discussion happened on Twitter. Twitter was just one of many new media that became more widespread this year. And just as scientists were getting comfortable with these channels of communication, science writers were too. I spent a fair amount of time in 2011 experimenting with different formats. On Twitter, I went after some egregiously bad science with a hashtag: #Greenfieldism. When I wasn't on Twitter, I was often on Facebook, Tumblr, and Google+. Each medium has different strengths, I've found, which only emerge after playing around with it for a while. Google+ has spurred some fascinating discussions; Twitter is a fast way to spread links. I spent some time working with the folks at Radiolab this year, including the newly minted Macarthur genius Jad Abumrad. It was fascinating to see them turn spoken words into symphonies, such as this episode entitled "Patient Zero." Another form of storytelling can be found at Story Collider, where people tell tales live in front of an audience. An invitation to be a part of a Story Collider evening led me to talk about how a trip to a war zone made me realize just how deeply science speaks to me. And at the end of the year I published Science Ink, a book born out of a blog-based obsession with science tattoos. It was a strange year indeed when a traditional book felt like a fresh new format. And it makes me eager for the surprises waiting for us in 2012. [Image: Wikipedia]