Your Anxiety Could Get Passed On To Future Generations 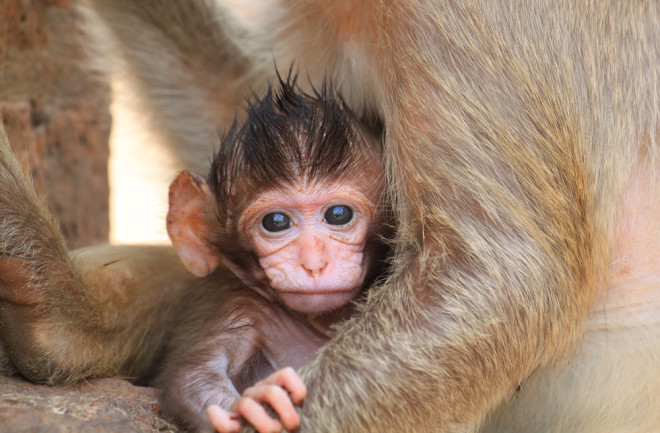 A study of rhesus monkeys shows that anxious adults can lead to more anxious offspring. (Credit: Skynavin/Shutterstock) You have your mother’s eyes. You have your father’s nose. But might you also have Grandpa Joe’s high anxiety? That’s a possibility, according to a study of rhesus monkeys published July 30 in the Journal of Neuroscience. In recent years, researchers have explored the heritability of personality, including outliers like altruism and bashfulness. This latest study in monkeys, led by scientists at the University of Wisconsin-Madison, suggests anxiety might also be heritable. The work could lead to better understanding of anxiety disorders in children. Between 2007 and 2011, researchers studied 378 pre-adolescent rhesus monkeys whose pedigree was known for eight generations. To gauge their anxiety level, a human stranger stood for 30 minutes in the presence of a caged monkey. The stranger did not make eye contact with the animal, which meant the creature could not glean the intruder’s intent. “It’s a situation intended to model an unfamiliar, potentially threatening stranger, which is a test often used in developmental psychology labs to study anxiety response in children,” says co-author Jonathan Oler of the University of Wisconsin School of Medicine and Public Health. The monkeys reacted with freezing behavior and decreased vocalization, the degree of which was logged by an observer. Each monkey’s level of cortisol, a stress hormone, was also measured. After the encounter, brain activity of the young monkeys, now under anesthesia, was examined through scans. The monkeys that reacted the most stressfully also showed specific brain activity in the amygdala, which processes emotional responses like fear. Two regions — the central nucleus and the bed nucleus of the stria terminals — both spiked. A similar brain response was found in ancestors of the hyper stressed monkeys. The young monkeys were more likely to be anxious if their ancestors had experienced anxiety, too. Researchers had previously determined that anxiety is 29 percent heritable in rhesus monkeys. This study goes further by showing two brain connections linked to anxiety might also be passed down through generations. “This connectivity may share a genetic basis with the anxiety,” says Oler.