Would People Rather Smack a Baby or Watch a Baby Get Smacked? (With Pictures!) 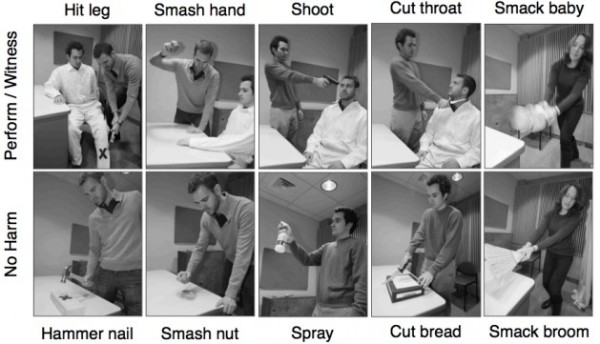 Truly one of the strangest figures we've ever seen in a paper.

Good news, kids: turns out we humans feel pretty awful about harming other people. That much you'd expect. But there's a question about exactly what this feeling is: is it more that we feel the victim's pain, or that we feel especially bad for causing the pain? Psychologists put this question to the test in a paper called "Simulating murder

," which does, among other things, exactly what the title suggests. They made participants perform a slew of fake violent acts, such as pointing gun at someone's face or smacking a baby against a desk, and asked partipants to either perform them or watch them being performed. If the victim's pain was what matters, participants would presumably react the same in both situations. Instead, participants had higher blood pressure and more constricted blood vessels---indicators of higher stress--when they were the guilty party. The subjects also performed similar but not objectionable physical tasks, like smacking a broom instead of a baby, to make sure simple physical exertion didn't account for the difference. Don't worry, no babies were harmed in this study, though some baby dolls were. From the task descriptions, it sounds like the researchers had raided a Hollywood prop store:

Participants in the “perform harm” condition were asked to perform five actions in a fixed order: (1) smashing the victim’s shin with a hammer – a PVC pipe was worn under a fake pant leg, (2) smashing the victim’s hand with a rock – a rubber hand was placed at the cuff of the shirt and the actual hand was obscured from sight, (3) discharging a handgun into the victim’s face – a weighty metal replica, (4) drawing a knife across the victim’s throat – a rubber knife, and (5) smacking a baby against the table – we used a realistic looking baby doll.