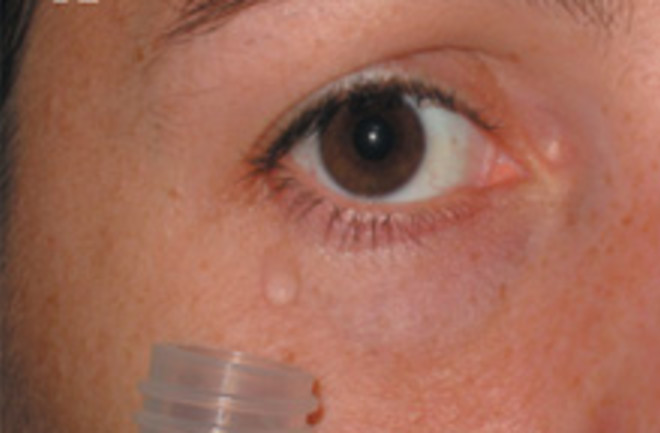 In an Israeli laboratory, Shani Gelstein is harvesting a woman’s tears. The volunteer is watching the end of the boxing film The Champ. Asshe weeps, she holds a vial under her eyes to capture the fresh drops. This might seem ghoulish, but Gelstein has used the collected tears to understand why people cry during emotional times. She thinks they’re a chemical signal.

Gelstein used several different techniques to show that the smell of a woman’s emotional tears could reduce a man’s sexual arousal. The men never actually saw anyone cry, and they didn’t know about what they were smelling. Even so, their sniffs reduced their testosterone levels and they lowered the activity in parts of their brain involved in sexual desire.

had men smell both women's tears and saline that had dripped down women's cheeks, and measured the men's reactions. The fascinating (if preliminary) results suggest new possible reasons why we cry at emotional times--read the rest of the story at Not Exactly Rocket Science

. Related Content: 80beats: Do Humans Communicate Via Pheromones? The Jury Is Still Out

Discoblog: Why a Primate’s Sexy Smell Only Works on Non-Relatives

DISCOVER: There's Nothing Sexier Than... a Nursing Mom?