Who's Afraid of Negative Psychology?

Medium recently published a piece by neuroscientist Jim Coan called Negative Psychology, in which Coan criticized what he sees as a recent, problematic trend towards overly-critical discourse around psychology, especially on blogs and social media. 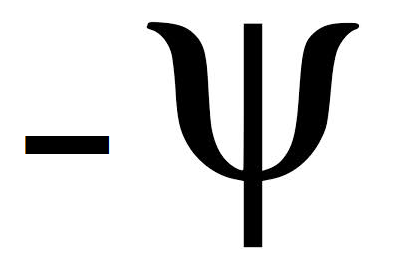 Moreover, Coan cited me (namely, this post of mine) as part of this unhelpful 'negative psychology' movement. The day that article was published, I was heading off on holiday, although I did find time to make a few comments on Twitter, in response to which Coan (graciously) updated the article to correct some points of detail in his characterization of my post, but he did not blunt the general thrust of his argument (to which we'll return later). Upon my return to the UK, I sat down to rebut Negative Psychology - but I found that I actually agree with many of Coan's arguments. Or you might say that Coan agrees with my arguments, because in many cases I made the same points, previously. For example, Coan criticizes the conflation of scientific fraud with questionable research practices (QRPs):

But I criticized this equation myself back in 2012, devoting a whole post to emphasizing the distinction in my Two Problems with Science, warning that "There’s lots of concern at the moment over mistakes, misconduct and misbehaviour in science... [but] I worry that much of the recent discussion has failed to distinguish between two fundamentally distinct problems [fraud and sloppiness]." Elsewhere, Coan warns about 'pseudocriticism', saying that

Pseudocriticism is a cousin of pseudoscience. Both adopt the superficial trappings of science without the substance. As with pseudoscience, the lay public are ill equipped to evaluate the claims of pseudocritics. But the snark and outrage are readily interpretable.

I agree. One of my first ever posts was about this, and I said amongst other things that "the idea that anyone can look at the evidence and reach their own conclusion seems only fair and democratic...[but] it’s balls. Unless you are a professional... the chances are that you just don’t know enough to come to an informed conclusion [about most scientific debates, e.g. global warming]..." Moreover, Coan says that

The habit of Negative Psychology dilutes serious criticism by shifting attention from content to snark and outrage...

I identified this kind of attention shift

One of the pitfalls of debate is the temptation to indulge in tearing down an opponent’s arguments. It’s fun, if you’re stuck behind a keyboard but still feeling the primal urge to bash something’s head in with a rock. Yet if you’re interested in the truth about something, the only thing that should concern you is the facts..."

By showcasing these examples I'm not trying to claim priority in making these arguments. Others said them, and better, long before me. What I'm suggesting is that I do understand where Coan is coming from. I am aware of the dangers

of pseudocriticism in psychology and in science in general. I know the need to be skeptical of the skeptics

. Yet I don't share Coan's concern over 'negative psychology' today. Why not? Because I just don't recognise the picture Coan paints. I think I'm on the alert, but I'm not sounding the alarm because I see nothing amiss. Maybe I'm overlooking something? It's quite possible, but Coan's piece gives no indication as to what I'm overlooking, because he gives few concrete examples of the problems he decries. Perhaps this is because he didn't want to offend any individuals but, either way, this vagueness makes it hard to evaluate his argument. For instance, when he says (emphasis mine)

As a psychological sketch of a generic situation, this makes sense. Hypothetically, after running out of serious stuff to criticize, any critic must face the choice of either going quiet, or resorting to non-serious criticisms. This can and does happen. But has this in fact happened in psychology? If it has, where are the examples? In fact, there is one specific example in 'Negative Psychology' and it's me, and my Science Needs Vigilantes

post. I'll reiterate what I said on Twitter about this, which is that you should read my post alongside Coan's, and make up their own minds about it. 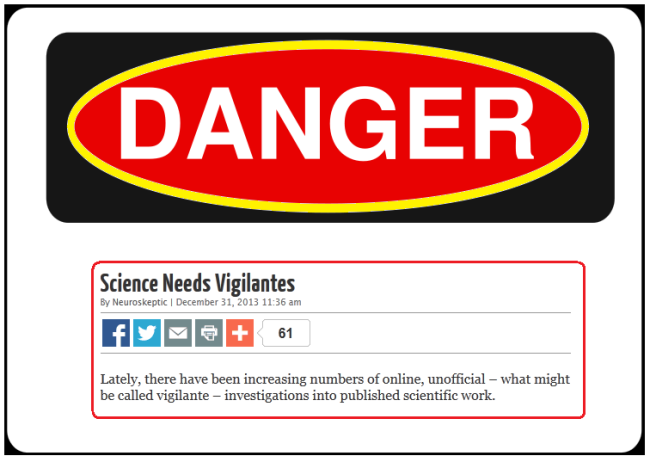 But even granting that my post was the sort of rabble-rousing manifesto that Coan paints it as, that would not really help Coan's case unless he could give examples where the unqualified rabble were actually running amok and causing real harm in psychology. Where are they?

In summary, I found little to actually disagree with in Coan's post, because it mostly consists of general warnings about the pitfalls of debate - any debate - pitfalls which, in many cases, I've warned about myself, years ago. I don't recognize the picture of 'negative psychology' as having yet fallen down into any of these pits, as Coan suggests, but since Coan gives no concrete examples, there's not much to disagree with on that score either. Perhaps his concern is about a gestalt 'overall impression', rather than any one incident, but in that case we may be in the realm of the purely subjective.

When I said I don't really disagree with Coan, I'm not being passive-aggressive. I found Coan's post interesting, I think 'negative psychology' is a handy term, and I thank him again for being quick and gracious in correcting the post in response to minor issues I raised on Twitter. But I'm genuinely puzzled as to how Coan and I have ended up on 'opposing sides' here. As I see it, the one thing we scientists ought to oppose is error.