When Does Depression Become A Disease?

When does sadness cease to be a normal emotional response, and become a mental disorder? Can psychiatrists 'draw the line' between healthy and sick moods, and if so, where? 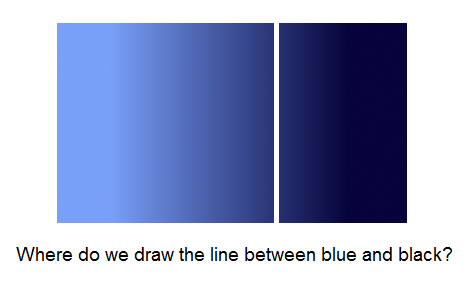 An important new study offers an answer: When does depression become a disorder? Using recurrence rates to evaluate the validity of proposed changes in major depression diagnostic thresholds (free pdf). The authors, Jerome Wakefield and Mark Schmitz of New York, made use of the ECA survey, a 1980s study of almost 20,000 American adults. Participants were surveyed twice each, approximately one year apart. On each occasion, they were asked questions about their mood, emotions, and mental health symptoms. Some people reported a history of depression at the first visit. Wakefield & Schmitz wanted to find a way of predicting which of those people were most likely to end up depressed at the time of the second interview, a year later - the recurrence rate. To do this, they examined the particular patterns of symptoms reported at the first visit. It turned out that there was a strong predictor of recurrence, which the authors call "complicated" depression. People with a history of complicated depression had a 15% chance of being depressed at follow up. Only 3.4% of those who'd had "uncomplicated" symptoms, however, were depressed a year later. Given that 1.7% of people with no depression history had become unwell by Time 2, this means that "uncomplicated" depression was almost never recurrent. So what exactly is "uncomplicated" depression? The criteria were: episodes that last no longer than 2 months, and that do not include suicidal feelings, psychotic symptoms, psychomotor retardation, or feelings of worthlessness. If any of those symptoms were present, or if the low mood lasted longer than 8 weeks, it was classed as "complicated". Now, the concept of a "complicated" mood episode is actually a pretty old one in psychiatry, but it was originally intended to only apply to bereavement. An "uncomplicated" bereavement was regarded as a normal reaction to a loved one's death; only if grief was characterized by certain symptoms was it seen as "complicated" by depression. According to Wakefield & Schmitz, this complicated/uncomplicated distinction is so important that it can be applied to

all potential cases of depression - not just bereavements.

The implication is that episodes of low mood that last less than two months, and that are free of certain symptoms, are not pathological, in the sense that they don't predict future illness. Neuroskeptic readers may remember the background to this. Two years ago, I blogged about first author Jerome Wakefield's criticisms of the American Psychiatric Association (APA)'s upcoming DSM-5 criteria. Back then, Wakefield was arguing against the APA's decision to scrap the 'bereavement exclusion' to the depression criteria. The bereavement exclusion says that low mood doesn't count as depression if it happens in the context of grief... unless the symptoms are "complicated", as we've seen. DSM-5 is set to get rid of the grief exclusion and, as a side effect, also the complicated/uncomplicated distinction.