The past few years has seen "brain-to-brain communication" move from the realm of science fiction into reality. Numerous papers have reported on different brain-to-brain interface devices, of which a typical example is this 2014 report by Rajesh Rao and colleagues describing a device in which EEG is used to detect activity in one person's brain, which then sends a message over the internet and then uses a TMS coil which generates a magnetic pulse that induces activity in the brain of another person. 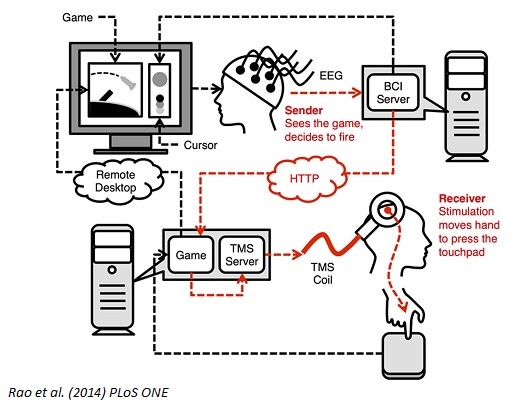 Now this device and otherslike it are undeniably cool, but when you think about it, are they really that groundbreaking? If this is "brain-to-brain communication" (or even "telepathy"!) then doesn't (say) speech also deserve that title? After all, in speech, the speaker's brain activity is what drives their vocal cords to encode a message which is sent (via sound waves) to the receiver, and a specialized device (the ear) turns that message into brain activity in the primary auditory cortex. It's then up to the rest of the brain (i.e. it's up to the receiver) to make sense of that. When you think about it like that, the high-tech EEG/TMS set-up looks rather like a Rube Goldberg machine - an impressive and elaborate way of doing something that we already knew how to do in a much simpler way. This got me thinking: if we're saying that existing brain-to-brain interfaces are not really doing anything new, then what would a 'real' brain-to-brain device be like? If existing brain-to-brain communication can be compared to the model of speech, what might be the model of a more radical kind of brain connectivity? Is there an existing process by which two or more brains are connected in a deepr way than via language? Maybe the answer lies inside the brain itself. The corpus callosum (CC) is a nerve fiber bundle that connects the left and right hemispheres of the cerebral cortex. Each half of the cortex is almost a whole brain in its own right, as the many striking experiments on split-brain patients have famously showed. Maybe the CC is not so much linking two halves of one brain, but rather, connecting two brains in such a radical way that they become like one. Maybe the corpus callosum is the original brain-to-brain communication device. Now, we are not aware of having a left brain and a right brain that are constantly exchanging messages. That is all beneath our consciousness. Similarly, if I'm talking to you, I'm aware of talking to you as a (single) person, not as a pair of linked halves. My point is that is our two hemispheres are connected in a way that's very unlike the situation with speech. With speech - and with existing brain-to-brain devices - messages are sent by one person and received by another, both of whom are aware that the message is an external signal that passes between them. But perhaps a 'true' brain-to-brain interface would be one in which the messages were not perceived as external messages at all. So for instance, suppose it were possible for me to send messages into your brain which you experienced, not as messages from me, but as your ownthoughts or decisions (shades of Inception here). This would be radically unlike any existing form of communication, including our existing brain-to-brain devices. Would such a thing be possible? I'm not sure. But, were we ever to achieve it, a sufficiently advanced brain-to-brain communication interface might be indistinguishable from mind control.