What Seasoning Is Essential for Life, Deadly at High Doses, and Confusing to Neuroscientists?

It's obvious that salt tastes good. But how our tongues detect saltiness is not so obvious. 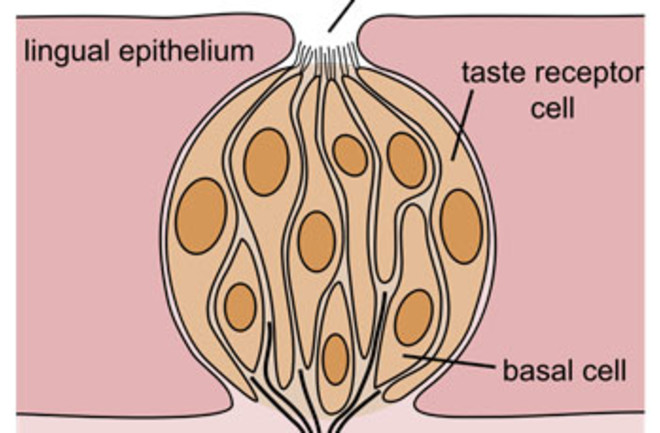 Each taste receptor cell in a taste bud is sensitive to just one of the five tastes. When a sweet molecule latches onto a sweet taste cell’s receptors, it sends a distinctive message to the brain. | NEUROtiker/Wikimedia Commons

Sweetness is an almost indescribable sensation. Not to science, though: the taste has recently been traced to a single receptor on the surface of cells on your tongue. The receptors responsible for savory umami flavor and for the bitter taste of your morning coffee have also been identified. And scientists are hot on the trail of the receptor for lemon’s sour pucker.

But what about saltiness, you say? What about the taste so important, and so irresistible, that legislation may be required to curb Americans' intake? Salt has not yielded so easily to the techniques that found the sweet, umami, and bitter receptors. It turns out that's because salt is both essential for living and capable of killing.

Our bodies absolutely need the sodium in salt to function. Each message sent along a nerve begins with a flood of sodium ions rushing across the cell’s outer membrane. Sodium is also responsible for controlling our blood pressure and for keeping our cells properly filled with fluid. It’s a non-negotiable nutrient.

As a result, molecules sensitive to sodium are embedded in cell membranes all over the body. That means that the approach that worked so well for finding the sweet receptor—identifying a likely gene for the receptor, destroying it in mouse embryos, and proving that the resulting mice are unable to taste sweetness—will not work in the search for the salt receptor. Destroy a gene for a common sodium receptor and your mice won't survive long enough to be born.

In a major breakthrough several years ago, two research groups, the Zuker group at Columbia and the Bachmanov group at the Monell Center for Chemical Senses, each got around this problem by finding drugs that could temporarily block a certain type of sodium channel in mice's mouths. When animals treated this way had been deprived of salt, they did not distinguish between salty water and plain water, a paper from Zuker's lab reported—just as you would expect if that channel, called ENaC, were required for tasting salt.

But it turned out there was more to the flavor of salt than that. Bachmanov’s group noticed that even with ENaC out of commission, the nerve that carries salty sensations from tongue to brain still showed some activity. Additionally, blocking ENaC doesn’t diminish the flavor of salty-tasting non-sodium substances, like potassium chloride. This raises the possibility that there might be additional receptors involved.

Both groups noticed something else, though, that has an even more fundamental meaning for our understanding of how taste works: Though the ENaC-less mice did not seek out salt, they did avoid water with very high concentrations of it.

Once researchers gave them bowls of very salty water, they, just like normal mice, would not drink it. This suggests that unlike all the other tastes we've cracked so far, salt perception has two parts: some receptor that's involved in making salt attractive, and a second receptor, or other biological process, that makes it unattractive at high concentrations.

The existence of two mechanisms would make sense for what we know about biology: Salt is necessary for life, but too much salt can kill you, and not just in the sense that excess salt in the diet may be behind some cases of heart disease. Dunk cells in saltwater, and they shrivel up as the water inside them rushes out to dilute the salt outside. Just a few salty swallows of the Dead Sea can kill you. So while mice like the taste of salt, past a certain concentration they find it disgusting. The same is true of us. This appears to be a biological mechanism to keep us from overdosing. “With sweet, in general, the system is geared to finding it—if you detect sweet, you want to eat it, because this is energy and you need it. With bitter, you’re programmed to avoid it. There is no fine balance of ‘eat it now’ versus ‘don’t eat it’ at another instance,” says Jayaram Chandrashekar, a senior scientist in the Zuker lab at Columbia. Although humans may develop preferences for a certain amount of sweetness or nurture a love of bitter coffee, on a fundamental level salt is the only taste that has this kind of switch.

The search is now on for that other mechanism, that second process that makes us reject salt. Researchers are looking for taste bud cells that might involved in turning off our desire, but also considering, Chandrashekar says, the possibility that once saltwater reaches a certain concentration, it leaks between the taste bud cells and makes its way down to the nerve directly. That pathway, if it pans out, would junk the idea that there is some specific molecule involved at all—a fascinating, though perhaps bittersweet, resolution to the search for a salt receptor.