Citations are today the international currency of the scholarly economy. In theory, academic citations are the gold standard measure of the 'impact' of a piece of work. If it gets other academics talking then it's important. But why do individual academics cite particular articles? A paper out now in the Social Studies of Science journal suggests a complex set of reasons: A taxonomy of motives to cite. The Swedish authors, Martin G Erikson and Peter Erlandson, say that:

The four categories we suggest are Argumentation, Social Alignment, Mercantile Alignment, and Data. The first three can be found in the process of writing all kinds of scientific papers from all kinds of research traditions. The fourth, however, is limited to papers in which the main purpose is to analyze the writings of others, particularly in review papers or meta-analytic studies. 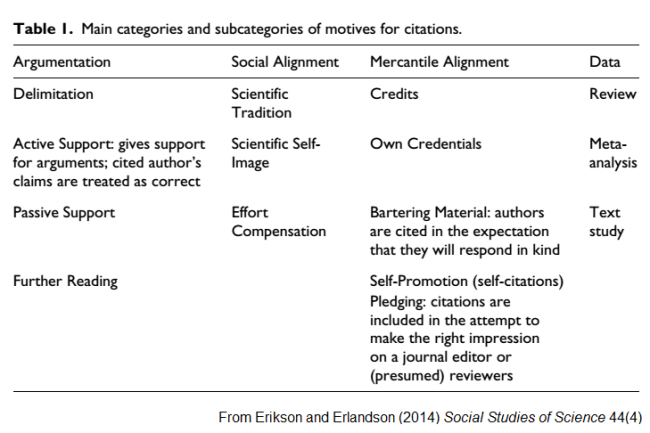 In this scheme, Argumentation covers the 'traditional' reason for citation: you cite a paper to support an argument (broadly construed). This includes citing ideas in order to criticize them. The 'Data' category includes cases in which the cited paper constitutes the data for your analysis, as in a meta-analysis or bibliometric study. The other two categories deal, perhaps, with the more controversial kinds of citations. Social Alignment, according to Erikson and Erlandson, is when

the motive for citing is found in the author’s identity or self-concept. Here, we have identified three subcategories: Scientific Tradition, Scientific Self-image and Effort Compensation. All three refer to ways the citing author presents himself or herself through the text, as well as providing the security of a well-defined field... By showing affiliations and belongings, the author creates a context for the reader, putting some potential readers off while appealing to others who will read the paper more favorably.

I liked the idea of the "Scientific Self-Image", for example:

Through the use of citations, the author can make a self-presentation, for example, by appearing to be mainstream and safe or avant-garde. The way the author handles the seminal works of the field or how the arguments are built around theory or method can expose orthodoxy as well as iconoclasm or eclecticism in one’s approach... In other words, citation is not only used to define the tradition with which the author wishes to be identified, but also to convey a desired image of who the author is in relation to this tradition.

Finally we have the somewhat oddly-named category of Mercantile Alignment, which according to the authors includes Credit, when citations are used to give previous authors credit for their ideas (whether or not these ideas are important for the argument), Bartering Material in which one author cites another in the hope that they will get cited back in exchange; Self-Promotion by self-citation; and Pledging in which citations are included for the purposes of making editors and peer-reviewers happy. Overall this is a very nice paper, though it doesn't address the issue of how scientists decide on which papers to cite. In many cases there are multiple possible papers that would equally well serve a given motive e.g. when writing I have often thought to myself, "I should cite a review about the influence of X on Y to back up this statement" - and there might be dozens of such reviews. What determines which one I end up citing? I suspect that part of the answer lies in the ease with which a given paper can be found on a search engine. I might type 'X and Y review' into Google Scholar, and if I do, then I'll probably cite the top hit. It would be interesting to study whether "search engine optimization" can get papers more citations. I'd be surprised if it doesn't.