Researchers surveyed over 500 Christian Americans and came up with an image. 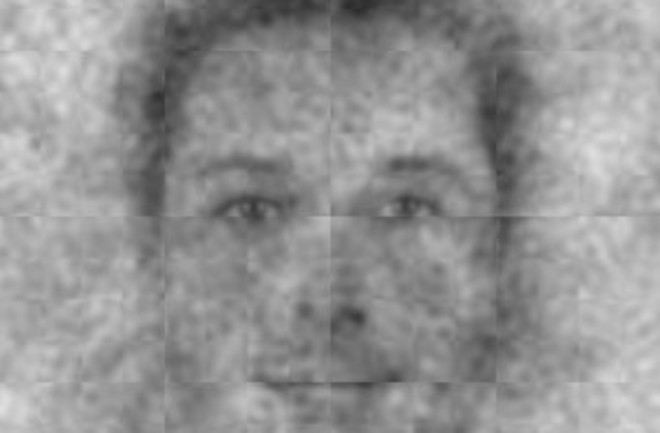 A composite image of over 500 U.S. Christian's perceptions of what God looks like. (Credit: Jackson et al.)

What would you say if you saw this stranger on a bus? Well, if you’re Christian, you might say he’s God.

Psychologists from the University of North Carolina at Chapel Hill surveyed 511 Christians in the U.S. and, based on the participants’ combined perceptions, this is roughly what they thought God should look like.

The team, led by Joshua Conrad Jackson, showed the volunteers 300 pairs of random faces. For each pair, people were instructed to flag the face they thought looked most like how’d they picture God. Afterward, participants completed surveys inquiring about how attractive the participants felt, their political leanings, gender and age. Finally, the team combined the participants’ picks into a single composite image.

But that was just the average of what everyone thought — there were some differences in how certain groups of the volunteers imagined the Almighty. People’s demographics helped shape their perception of God, according to the paper, which was published in PLOS ONE. African American participants were more likely to see God as darker skinned; younger volunteers were more inclined to picture a more youthful God; and people who thought of themselves as more physically attractive were likely to think of God as being attractive.

Political leanings also influenced people’s perceptions of the man upstairs. Liberals imagined God as younger, kinder and more feminine, while conservatives thought he was more likely to be Caucasian and powerful. “These biases might have stemmed from the type of societies that liberals and conservatives want,” says Jackson in a press release. “Past research shows that conservatives are more motivated than liberals to live in a well-ordered society, one that would be best regulated by a powerful God. On the other hand, liberals are more motivated to live in a tolerant society, which would be better regulated by a loving God.”

And even though liberals were more likely to conjure up a more feminine version of the Almighty in their heads, the researchers didn’t find any biases in how the volunteers saw God’s gender: Both men and women equally thought of God as a man. Sorry, Alanis Morissette.