What Breaks Down the Asleep/Awake Divide?

Narcolepsy may be caused by the body attacking part of the brain.

Harold Poertner used to fall asleep at the drop of a hat. “I’d be taking a bite of pie and my head would crash onto my plate,” says the 63-year-old retired educator and administrator from Emporia, Kansas. At other times, he’d be wide awake, but his body behaved as if it were asleep. “I’d be lying in bed, paralyzed,” he says. “It’s the scariest thing—I’d try to move my arms and legs, but they didn’t respond.” A joke or excitement could also trigger paralysis. “I could see you and hear you, but I couldn’t move my upper limbs or talk,” he says. “I’d be paralyzed from the waist up for seconds or sometimes even minutes.” Occasionally, Poertner experienced hallucinations so vivid they made him doubt his sanity.

Poertner has narcolepsy, a sleep disorder that affects between 25 and 50 people in 100,000. Medication has kept these symptoms largely under control—a good thing, since narcolepsy can cause some odd behavior. Poertner’s former tendency to take a nosedive into his pie is a classic sign of the disease, but the condition often manifests in lesser-known symptoms like paralysis, hallucinations, or “automatic behavior,” in which a person appears to be functioning normally but has no awareness of what he or she is doing. Because of these strange and unpredictable phenomena, sufferers often appear to be drunk or delusional rather than just extremely sleepy. Why the disease has such a wide range of effects isn’t completely understood, but in recent years a potential cause—the loss of hormone-producing neurons, possibly through an autoimmune response—has been identified. That knowledge in turn promises to pave the way for more precise treatments and stronger relief from narcolepsy’s debilitating symptoms. 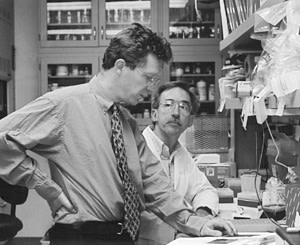 For a narcoleptic, it’s a great struggle just to stay awake. He or she may appear to be alert to others but be in a dream state, explains Michael Thorpy, director of the Sleep-Wake Disorders Center at Montefiore Medical Center in New York City. The narcoleptic’s strange behavior is related to his or her highly fragmented, chaotic REM sleep, a hallmark of the disorder. Normal individuals typically slide into REM (rapid eye movement) sleep about an hour and a half after initially losing consciousness. Not narcoleptics. They often go from being wide awake to REM in 15 minutes or less—sometimes mere seconds. They also spend less time in continuous slow-wave sleep, the deepest phase, from which it is hardest to be aroused.

Because their sleep at night is disjointed and marked by frequent awakenings, narcoleptics tend to be exhausted during the day, increasing their propensity for nodding off, even while in the middle of doing something else. What’s more, says Thorpy, fragments of REM—paralysis, for example—may intrude at inappropriate times. And because they can slide rapidly into REM at any time, people with narcolepsy are prone to hallucinations—or what sleep researchers refer to as hypnagogic imagery—when falling asleep. “A normal individual would be sound asleep when weird imagery starts floating across his mind,” says Thorpy.

Such vivid visions are nothing new to Joyce Scannell, 51, of North Kingstown, Rhode Island. “Since I was a kid, I’d have hallucinations while falling asleep or waking up that I thought were real because I didn’t know I had narcolepsy,” she says. “This lurker in my closet moved around my toys and tickled my feet. To this day I have to sleep with my feet under the covers because of the lurker.”

Like many narcoleptics, before treatment Scannell also had an extraordinary memory of her dreams, so much so that it was sometimes a struggle to distinguish their plot lines from reality. “I had a fight with Mick Jagger, then we made up and started making love on stage in front of the world, at which point I woke up,” she says. “For four hours afterward, it was like, God, did this happen or not? A dozen times I had to remind myself that I was not Mick Jagger’s girlfriend.”

Narcolepsy may manifest as paralysis, hallucinations, or “automatic behavior,” in which a person acts normally but has no awareness of what he or she is doing

Scannell believes her confusion stems from her memory of dreams being every bit as detailed and vivid as real events. Her intuition may be correct and could have a physiological explanation, says Emmanuel Mignot, a Howard Hughes Medical Institute investigator and director of the Center for Narcolepsy at Stanford University. “In normal individuals, REM is not only associated with paralysis but also suppression of memory consolidation, which is why most people can’t remember their dreams,” he says. “But there’s some evidence that this suppression may be less powerful in narcoleptics. Their dreams may be laid down in memory in the same way as other events during the day. In rare cases this may even cause a schizophrenia-like problem in which the individual mistakes dreams for reality.”

Another curious feature of narcolepsy is cataplexy. Any strong emotion—sadness, elation, laughter, fear—can cause an attack to come on: The narcoleptic’s muscles slacken and his or her face or body may become weak and begin to sag. In some cases, he or she may even collapse on the ground in a heap but still remain alert and aware of surroundings. Why powerful feelings can trigger cataplexy in some narcoleptics is not well understood.

Nonetheless, researchers have made great progress in elucidating the underlying causes of the disorder. The first big advance occurred in the early 1990s, when epidemiological studies revealed that 90 to 95 percent of individuals with the disorder carry a genetic marker associated with autoimmune disease—self-inflicted damage that occurs when the body mistakes its own tissues for a foreign invader and attacks them.

The next big clue came when Mignot of Stanford University tracked down a gene for narcolepsy in dogs and discovered it caused a mutation in a receptor for hypocretin, a neuropeptide involved in prodding the central nervous system awake and maintaining alertness and good muscle tone. Although humans with narcolepsy do not possess the same genetic mutation, this finding still proved instrumental in unraveling the disease’s fundamental cause. In most human cases, as research by Mignot and his colleague Seiji Nishino soon showed, the sufferer is deficient in hypocretin. Further sleuthing revealed that the cells that normally produce it in the brain seem to have been destroyed in narcoleptics. 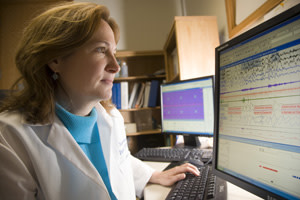 That knowledge, coupled with evidence that narcolepsy in humans might be an autoimmune disorder, has led many researchers to suspect that sufferers have immune systems that are genetically predisposed to attack and destroy hypocretin-producing cells. “That’s just a theory,” says Mignot. “We’ve not been able to prove it, but it’s our best hunch for now.”

These revelations about the underpinnings of the disease have in turn led doctors to rethink the prevalence of the disorder. In recent sleep lab studies of 600 people age 30 or older, Mignot was surprised to find that 1 percent—or 20 times as many as with classic narcolepsy—suffered from inordinate sleepiness, had a high frequency of the autoimmune marker linked to narcolepsy, and went very rapidly into REM when they napped. Yet none reported cataplexy. Even when the researchers took into account shift work and other environmental causes of daytime fatigue, the association held up. “It may be that a mild form of narcolepsy happens much more often than we realize and is an unappreciated cause of excessive sleepiness in the general population,” says Mignot.

The treatment of narcolepsy, once a highly debilitating condition, has improved markedly. Stimulants and other drugs such as modafinil are often very effective in helping narcoleptics fend off sleepiness during the day. And experts report that Xyrem, a central nervous system depressant, has revolutionized the treatment of cataplexy. The drug consolidates the narcoleptic’s sleep into a few blocks, preventing it from occurring in a scattered fashion throughout the day. “Just why that improves cataplexy we’re not sure, but there’s no question that it helps,” says Michael P. Biber, medical director of the Neurocare Center for Sleep near Brookline, Massachusetts. At his center, the drug completely relieved cataplexy attacks in all 18 subjects who took the drug as part of an experimental trial, including one person who had experienced 220 episodes one week prior to treatment.

Meanwhile, pharmaceutical companies are racing to design new narcolepsy drugs based on the discovery of hypocretin’s central role in the disorder. Unfortunately, hypocretin itself is too large to pass directly from the bloodstream into the brain, which is the way most neuroactive drugs work. So drug developers are attempting to design compounds that mimic the neuropeptide’s action but are still small enough to get inside the brain. “This is a very fertile area of research,” says Mignot. “It could bring about a big shift in how we treat the disorder in future.”

Scannell, for one, looks forward to more effective therapy. At one point, she lost her driver’s license because of narcolepsy. “I got woozy behind the wheel, and the police officer assumed I was DUI,” she reports. Still, she admits, there is one symptom of the disease she might miss if completely cured: her vivid, real-as-life recall of dreams. Says Scannell, “It was fun telling coworkers that I thought I was Mick Jagger’s girlfriend.”