Was Chopin Epileptic? Docs Try To Diagnose the Composer's Woes 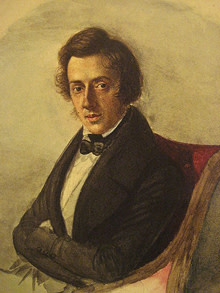 It's tough enough to play Dr. House with a living, breathing patient who's right there in the room. It's quite another thing to diagnose across distance and time. Yet some scientists find it irresistible to peek into the history books with the benefit of modern medical knowledge and try to crack the cases of historical figures who died too young. Was metal-nosed astronomer Tycho Brahe poisoned, for instance? And what caused Mozart's demise? (It wasn't Salieri.) This week, researchers turn their detective eyes to the famed romantic composer Frederic Chopin, who left behind a wealth of lovely piano compositions when he died at 39 in 1849. Writing in Medical Humanities, a specialized edition of the British Medical Journal, Spanish scientists led by Manuel Varquez Caruncho argue that there's an explanation for Chopin's health woes and momentary hallucinations that his 19th century doctors and subsequent investigations overlooked: The composer had a particular type of epilepsy.

Chopin's tendency to lapse out of consciousness was interpreted by his partner George Sand, pseudonym of the French novelist Aurore Dudevant, as "the manifestation of a genius full of sentiment and expression." But in the analysis published this week, Spanish doctors say Chopin's hallucinations may have been due to a temporal lobe epilepsy rather than the result of any sweeping artistic tendencies. [AP]

Letters by Chopin and memoirs by his friends record episodes in which he saw creatures emerging from the piano, or visions of himself at the bottom of a lake. The trouble is sorting out those hallucinations from the sickly Chopin's other symptoms: headaches, insomnia, and perhaps bipolar disorder or depression

[The scientists] acknowledge that the composer also took the opium-based tincture laudanum to quell his various physical symptoms. But they rule this out as the cause because of the quality of the visual hallucinations he experienced as well as the fact that he started having them long before taking this medication. Migraine with aura is another possible cause that they strike off the list because Chopin's visions were too brief. [BBC News]

Furthermore, Caruncho says, the composer's ability to remember his hallucinations so vividly is another piece of evidence that backs up the epilepsy diagnosis.

The condition can produce complex visual hallucinations that are usually brief and fragmentary, just as described by Chopin. There was limited understanding of epilepsy when Chopin was alive and the condition could easily have been overlooked by his doctors, the researchers noted. [HealthDay]

The Spanish team makes a strong case, but to know for sure, one would need to do the actual medical tests. And the Polish government seems disinclined to disinter one of its historical heroes; the country turned down previous requests by scientists who wanted to examine his heart. Related Content: 80beats: Danish Astronomer Tycho Brahe Gets a Postmortem, 400 Years Late

, including antimony, which may have done in Mozart. Discoblog: Did Arsenic Kill Napoleon? His Hair Says No.