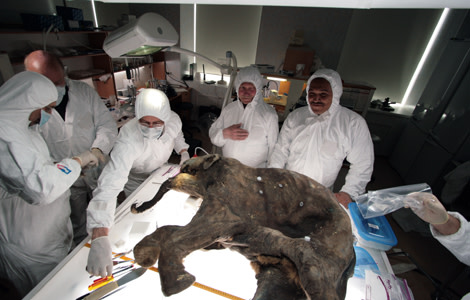 The 2007 discovery of a perfectly preserved, 40,000 year-old baby mammoth raised hopes that the animal's high-quality DNA could lead to a revival of the species via cloning. This week, an elaborately produced documentary from National Geographic Channel traces the path of the baby mammoth ("Lyuba") from discovery in Siberia to analysis in Russia and Japan, as scientists try to piece together the details of its life and death. Narrated by erstwhile Alias dad Victor Garber, the show makes impressive use of CGI animation and reenactments using the real-life participants to tell the story. Globetrotting University of Michigan paleontologist Dr. Dan Fisher travels to Siberia to meet the reindeer herdsman who stumbled upon the mammoth and then to Japan to CT scan the find. He later performs investigative surgery and forensic dentistry on Lyuba. Along the way, he makes several breakthrough mammoth discoveries, including that baby mammoths ate their mothers' feces(!). Things only get dicey when the producers call on Dr. Fisher to "act" alongside the CGI. So what about the cloning? Despite teasing the possibility in the promotion of the show, the producers ultimately admit that cloning is still a remote possibility. While Lyuba's DNA is the best preserved sample ever discovered, according to Fisher, "Cloning an animal as complex as a mammoth is far beyond our current technical capabilities, but there has been remarkable progress on various aspects of the problem. One day perhaps." Here at Discover, we'll keep working on the dino-chicken.