Visual Virtual People: A Better Model for the Behavior of Crowds 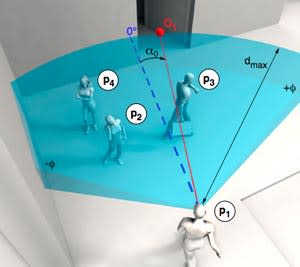 —more than 300 people died in a stampede in Cambodia

last year during a festival, and hundreds more have been crushed to death in periodic disasters near the Muslim holy city of Mecca

. A major flaw of computational models describing how people behave in crowds is that they are often too simplistic or too specific to a situation to explain both normal and disastrous behavior. A new model

manages to recreate both types of behavior, working from two basic visual rules: (1) each person will move in the least crowded direction in their line of sight, and (2) they will adjust their speed to maintain a safe distance from visible obstacles. “This work is an extremely important step in pulling together our fragmented understanding,” says behavioral biologist Iain Couzin, who was not involved in the study (via ScienceNOW

). “We’re now approaching a sort of unified understanding of human behavior in crowds.” How the Heck: