Visual Science: What Does Alzheimer's Look Like in Your Brain?

A 3-D rendering of a peptide shows a clear marker of the disease. 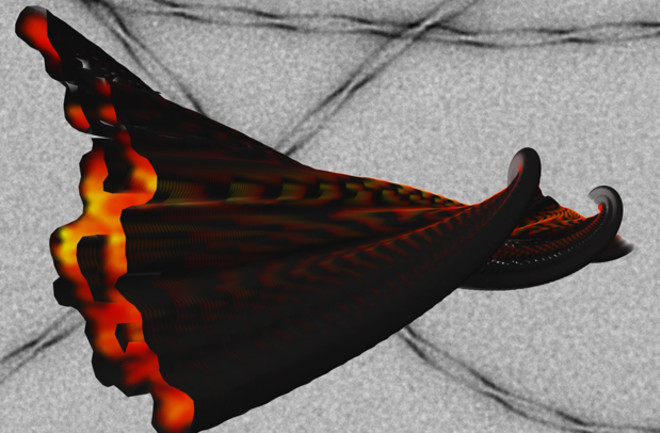 This A-beta peptide fibril has been rendered in 3-D by a transmission electron microscope, providing the most detailed look yet at the telltale sign of Alzheimer's disease. While we still do not know just how Alzheimer's progresses or what role the fibrils play, they are always found in Alzheimer's-ridden brains and are considered diagnostic markers of the disease. Marked by the red glow, A-beta peptide may give birth to Alzheimer’s disease through mechanisms still unknown. "It could be that the fibrils are toxic outside the cells, killing the neurons," says Nikolaus Grigorieff, head of the Brandeis team that created the image. Alternatively, he says, small clumps of the peptide itself could be to blame. "With this 3-D image, we can see what path the peptide takes," he says, helping us understand the properties of the fibril and get closer to curing this disease.

Taking on Memory For years people have associated Alzheimer's withamyloid-beta, or A-beta, proteins, but in a shocking study, researchers have found thatyoung brains are creating just as much, if not more of the protein than oldbrains.

After taking a close look at autopsiedhuman brains, scientists at the Buck Institute in Novato, California, foundthat those with Alzheimer's disease had about ten times as much cleavage inthe brain, a process that Dale Bredesen, Buck Institute founder andleader of the research group describes as "molecular scissors" cutting out the amyloid-beta protein. Whileresearchers think this act of cutting out amyloid-beta proteins in the brain isa major part of what causes Alzheimer's disease, it is apparently also part ofa healthy brain that Bredesen says ismade by all your brain cells all the time. "It's a normal part of plasticity,"says Bredesen, or the ability to retain, form new, and lose unimportantmemories. He compares the process to driving a fast sports car. Youngerpeople can effortlessly switch gears, forward and backward—forgetting theinconsequential but also learning and remembering masses of new information. InAlzheimer's disease, however, a biochemical "switch" associated withthe cleavage of the amyloid peptide seems to lock Alzheimer's brains into areverse gear of forgetting alone.

The Buck Institute researchers still agreewith conventional wisdom that preventing the accumulation of APP (the precursor to A-beta protein) in the brain of Alzheimer'spatients is important, but they are looking for ways to add somethingnew— a way to restore the brain's memory and forgetting balance. "We are now focusing on nerve signaling,"says Breseden, "and efforts to 'disconnect' the molecular mechanism that locksmemory-making in the reverse."