Viruses and the Cancers of Poverty

In an earlier post, “The Most Powerful Carcinogen is Entropy,” I included a pie chart that breaks down cancers in the United States according to their causes. The numbers almost always take people by surprise, mostly because of the very small percentage of cases attributed to synthetic chemicals in the environment. But it is also striking that relatively few cancers, at least in the developed world, are caused by viruses. They seem like such likely culprits. Here is how I describe them in The Cancer Chronicles:

Existing on the boundary between chemistry and life, viruses are packets of information— streamlined sequences of DNA or RNA wrapped in a protective sheath. They are wandering genomes so simple that some consist of only three genes. Like the handmade Internet viruses they later inspired, they infiltrate their hosts (the biological computers called cells) and commandeer the internal machinery. There the invader’s genes are dutifully duplicated and repackaged again and again, the viral copies spreading to other cells where they robotically carry out the same routine—life itself stripped of its capacity to do anything except reproduce.

Since cancer is a disease of genes gone mad, it is natural to suspect that viruses would be a primary cause of cancer. But they appear to be involved in only a few varieties. The most prominent, by far, are liver and cervical cancer, and the problem is especially fierce in the poorer parts of the world, which account for about 80 percent of all cases. Overcrowding and poor sanitation, intravenous drug use, unprotected sex -- all of these are vectors of infection. The lack of medical care -- especially early screening-- adds another layer to the problem. While in the U.S. and other wealthy countries viruses appear to be involved in about 5 percent of all cancers, in some countries the number can be as high as 20 percent. (The worldwide average is about 13 percent.) These maps, from the World Health Organization, illustrate the divide between rich and poor. The darker the red, the higher the cancer incidence. 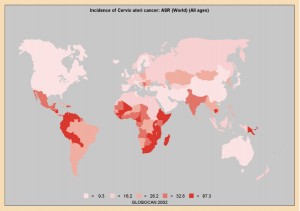 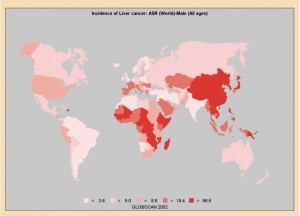 Incidence of liver cancer in men 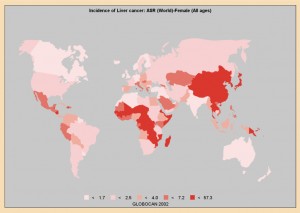 Incidence of liver cancer in women The most distressing part of the story is that so many of these cancers are preventable. The main cause of cervical cancer is human papilloma virus. The widespread use of pap smears has beaten back the disease in the richer countries. Abnormal, “dysplasic” cells can be identified in the gynecologist’s office and removed before they mutate further. The HPV vaccine is set to deliver the final blow. Liver cancer is a trickier matter. A primary factor is infection by hepatitis B and C. Those can be targeted through public health programs, and there is a vaccination for hepatitis B. But early detection of the cancer itself is highly unlikely. By the time liver cancer manifests itself, it is usually too late. Another complicating factor -- a huge one -- is alcoholism. The scarring of liver tissue from cirrhosis and the invasion of hepatitis viruses is an especially deadly combination. Aflatoxin, which is produced by Aspergillus molds, is another important factor. Of the hundreds of kinds of cancers, six are responsible for killing the most people worldwide. The top one is lung cancer caused by cigarettes. Like cervical and liver cancer it is also preventable. That leaves stomach cancer, colorectal cancer, and breast cancer. The latter two might be called cancers of affluence, for they tend to be most prominent in the wealthier parts of the world. But that is another story. For a preview of The Cancer Chronicles, including the table of contents and index, please see the book's website. @byGeorgeJohnson