Brain responses to emotion stimuli are highly variable even within the same individual, and this could be a problem for researchers who seek to use these responses as biomarkers to help diagnose and treat disorders such as depression. That's according to

a new paper in Neuroimage,

from University College London neuroscientists Camilla Nord and colleagues. Nord et al. had 29 volunteers perform three tasks during fMRI scanning. All of the tasks involved pictures of emotional faces, which are commonly used in emotion biomarker studies. Each volunteer performed the fMRI tasks four times: twice on one day, and then twice again on another day roughly two weeks later. The reliability of the neural responses to emotions was defined using the intraclass correlation coefficient (ICC). Higher values indicate more consistency within individuals. The results showed poor reliability of the activation in key 'emotional' brain areas, the amygdala and the subgenual cingulate cortex (sgCC). The emotion face tasks did cause activation in these regions, but the strength of the effect wasn't consistent within individuals. By contrast, activation in the fusiform face area (FFA), a brain area that responds to faces, rather than emotions, was pretty consistent. Here are the reliabilites between the two scanning days: 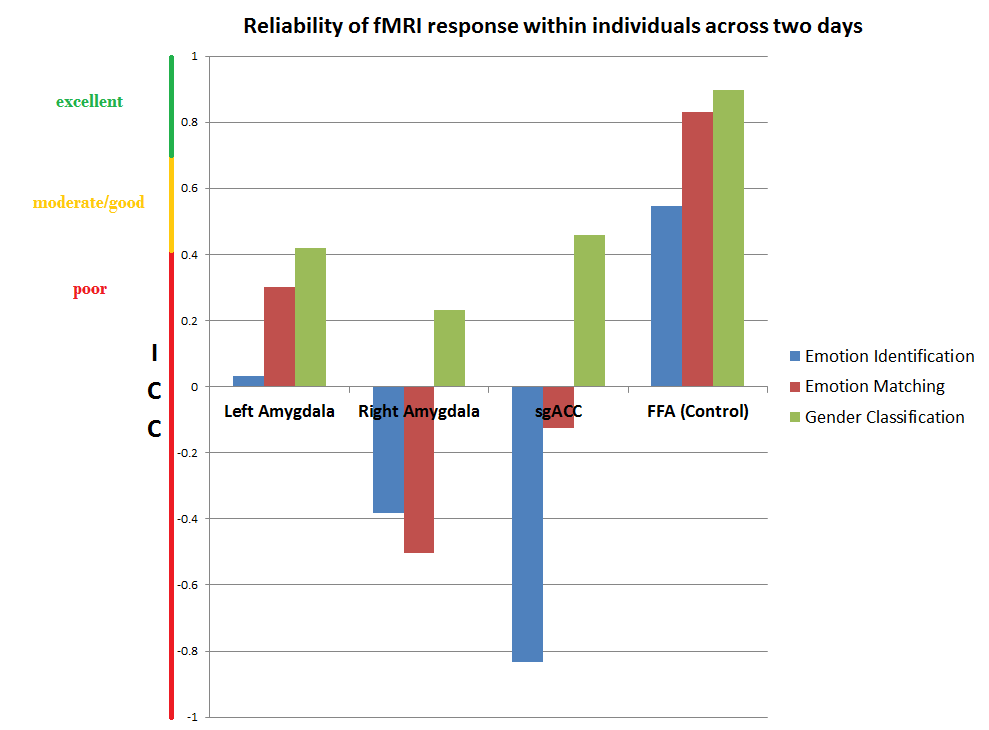 The reliability scores within each scanning day were little better than those between days. An ICC of below +0.4 is generally considered 'poor', and most of the ICCs were well below this, except for the FFA. Nord et al. comment that these results suggest that the amygdala and the sgACC may not make ideal fMRI biomarkers:

We observed surprisingly low within-subject reliability of three putative fMRI biomarkers, the amygdalae and sgACC response to emotional faces... our results suggest that many of the task-evoked responses assumed to be stable within individuals may not in fact be viable fMRI biomarkers, at least not using these three common paradigms.

I asked senior author Jon Roiser for some additional comments on what these results mean. He kindly replied: Neuroskeptic: You used an optimized fMRI sequence in a 1.5 Tesla MRI scanner. What do you think are the implications of these results for studies at higher field strengths, or using other sequences? Jon Roiser: I am not sure that we can extrapolate these results to higher field strength scanners, or even predict whether we would expect the reliability results to be better or worse. In part it would depend on the optimisation of the sequence.On the one hand scanners with higher field strength inherently have greater signal-to-noise ratio which should improve measurement reliability. On the other hand, echo planar images from higher strength scanners are also more affected by dropout caused by the susceptibility artifact, which is a concern in the specific regions we assessed. Plichta et al. (2012)

reported even worse low reliability than we found at 3T in the amygdala for one of the same tasks as we used. Sauder et al. (2013)

reported similar amygdala ICCs to us, again at 3T. Based on these results, I would say that moving to higher field strength wouldn't necessarily result in improved reliability. Neuroskeptic: What's driving the low reliability you saw in the amygdala and sgACC? Is it a "real" biological fact that activity in these areas varies within-subject, or is the variability a product of the fMRI measurement in some way? Jon Roiser: I don't know. It's not simply an issue to do with the measurement of haemodynamic responses per se, as we generally saw excellent reliability in the FFA - again similar to Sauder et al. (2013)

. But on the other hand FFA is a superficial region in which measurements will benefit particularly from the 32 channel head coil we used. The amygdala and sgACC are deeper structures than the FFA, and therefore they're further from the headcoil, so it's possible this would affect the MRI measurement. However, I think it's also perfectly possible that the underlying neuronal responses are quite variable over time.