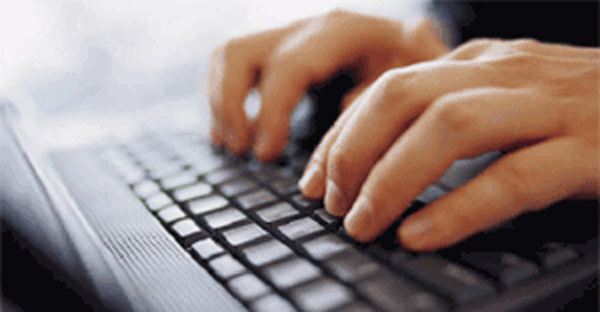 I’m typing about typing. As my fingers flit over the keyboard, my brain is hard at work. It is accessing my knowledge of language, processing the information taken in through my eyes and fingers, and coordinating the movements of my fingers. And all the while, I’m looking for errors. Spotting mistakes is a crucial part of typing (and indeed, life) and according to Gordon Logan and Matthew Crump, it’s a more complicated business than it might first appear. Using some clever digital trickery, the duo from Vanderbilt University found that the brain has two different ways of detecting typos. One is based on the characters that appear on the screen, and the other depends on the strokes of our fingers, as they tap away at the keys. Logan and Crump asked 22 good typists to type 600 words presented on a screen, one at a time. Their efforts appeared below the target word, but all was not as it seemed. Throughout the experiment, Logan and Crump occasionally took control to the display. Sometimes, they put up the correct word, regardless of what the recruits actually typed so that their mistakes never appeared. On other trials, they deliberately introduced mistakes, which the typists hadn’t actually made. When the volunteers made a genuine error, they slowed down afterwards. This drop in speed also happened when they made a mistake that was surreptitiously corrected, but not when a false mistake was inserted. So regardless of what the typists saw, the feedback from their fingers told them that they had slipped up and they acted accordingly. It looked as if the typists had resisted the illusion... but not quite. After their test, Logan and Crump asked the recruits whether they noticed any shenanigans, first subtly (“Did you notice anything about the kind of errors you made?”) and then more directly (“Did you notice that on some proportion of the trials the computer may have correctly typed a word even though you made an error?”) . The answers revealed that a substantial proportion of the volunteers had consciously fallen for the illusion and hadn’t noticed what had happened (even though their typing speed had changed accordingly). The vast majority took credit for the corrected errors and accepted the inserted ones as their own. Even when directly asked, around 20% didn’t spot anything unusual going on. According to Logan and Crump, this “illusion of authorship” reflects the fact that typing involves two different groups of skills that spot mistakes in different ways. The “outer loop” involves the language centres of the brain and is involved in producing the words that we type. It detects errors by checking what appears on the screen and matching it to our original intentions. If what turns up looks right, the outer loop thinks all is well and if what appears is wrong, the outer loop raises the alarm. The outer loop falls for the illusion. Meanwhile, the “inner loop” sets up the right sequence of hand movements that type out the words put forward by the outer loop. It detects errors by checking the feedback from the fingers and no matter what Logan and Crump do on the screen, it knows what the typist actually typed. The inner loop sees through the illusion but it operates at a largely unconscious level. It’s the one that slows down the typists’ fingers when they sense that the wrong keys were pressed. The experiment suggests that the two loops do indeed have different ways of spotting errors. Logan and Crump confirmed that by putting 24 typists through a variant of their first experiment (image below, left). This time, they were asked to say whether they had typed each of the 600 words correctly, immediately after each trial. Once again, they still consciously fell for the illusion, taking the blame for around 70% of the inserted errors, and taking credit around 90% of the corrected errors. But as before, they slowed down when they had made a genuine mistake, even for trials where they had been apparently fooled. A third experiment was even more blatant (image below, right). This time, Logan and Crump actually told their recruits about what they would do behind the scenes; their job was to tell the difference between what was right and wrong, real and fake. This time, they spotted the inserted errors well enough but amazingly, some of them still fell for the corrected ones. They were just as likely to notice the artificial correction as they were to miss it and take credit for the results.

These three experiments clearly show that two different processes prevent us from making mistakes as we type. The two loops depend on different types of feedback and they work independently; after all, it’s possible to fool one but not the other. Logan and Crump think that a similar pair of systems may control all sorts of abilities, including playing music and speaking. An inner loop deals with all the details, such as hitting the right notes or making the right sounds. Meanwhile, an outer loop matches the result to our intentions, checking to see if we have performed the right song or communicated the right message. Reference: Sciencehttp://dx.doi.org/10.1126/science.1190483