What if it were possible to measure your conscious experience, in real time, using a brain scanner? Neuroscientists Christoph Reichert and colleagues report that they have done just this, using fMRI - although in a limited fashion. Their research has just been published in Frontiers in Neuroscience: Online tracking of the contents of conscious perception using real-time fMRI The particular conscious perception that Reichert et al tracked was an example of a bistable visual percept. These are images (or, in this case, a movie) that can be seen in one of two ways. If you look at a bistable image for some time, it seems to 'switch' repeatedly between one state and the other - even though the image is unchanged. The best known example is the Necker Cube which can be seen as either pointing 'left' or 'right': 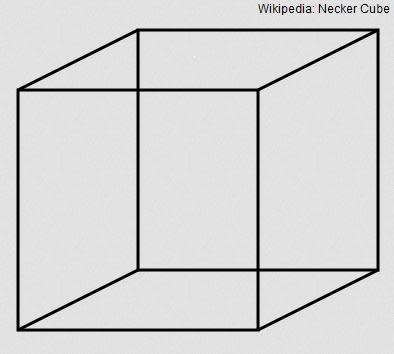 Because the 'switching' of a bistable percept is a purely subjective phenomenon, having nothing to do with objective changes in the image, it's a useful way to study conscious perception. Previous neuroimaging studies have found differences in brain activation associated with the different states of bistable percepts, but Reichert et al decided to investigate if it were possible to measure these in real time. The percept they used was a movie in which part of a simple line drawing was shown; in each frame a different part of the drawing was displayed, as if the drawing were moving left and right behind a grey screen with a vertical slit in it. The 'slit' is depicted below as an orange box, along with the whole drawing, but note that neither of these things were actually shown. What actually appeared on the screen was just a slice of the drawing, as shown on the right below. This slice was constantly changing (on a loop). 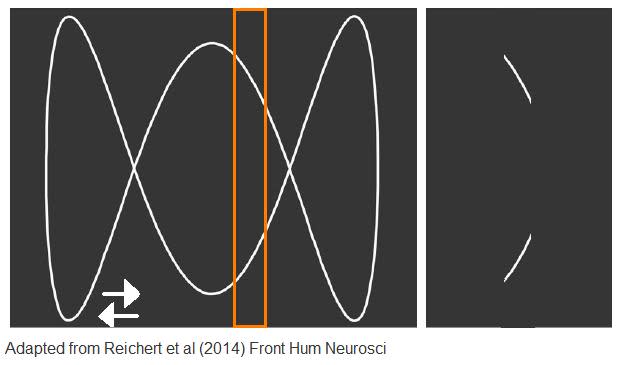 When viewing this movie, Reichert et al say, ones perception spontaneously alternates between 'two curved lines moving up and down' and 'one object moving left and right, behind a screen'. In other words, sometimes the brain 'fills in' the whole figure, but sometimes it doesn't, leaving the isolated lines. The alternations between the two impressions happen unpredictably, with anything from 5 to 50 seconds between each 'flip'. So, could brain activity be used to work out which perception someone is seeing at any given time? Yes indeed, say Reichert et al. They say that both the 'filled-in' and 'isolated' versions of the percept are associated with different patterns of neural activity and that, based on these characteristic patterns, the 'active' percept can be detected, in 'real time' (i.e. with about 10 seconds lag, due to the way fMRI works) with 75-80% accuracy. Just flipping a coin would get about 50% right so this is substantially better than chance. The design of the study was somewhat complex with several different comparisons but from what I can see, the methods were appropriate. Perhaps the most striking finding was that the real-time algorithm generalized across individuals (in a leave-one-subject-out validation). So it would be possible to put someone in the scanner, someone who'd not been scanned before, and tell what they were perceiving with no need for calibration. This is pretty impressive, and quite rare for a 'mind reading' fMRI algorithm. However, it's important to remember that this study was only about one very specific aspect of perception. It's really pretty amazing when you stop to think about it. Previously, only one person in all the world could possibly know which percept I was experiencing - me. I could tell you about my experience, but as it remained my experience, you'd have to take my word for it. You'd have no way to check. Now, thanks to Reichert et al, you do have a way. The veil of ignorance between I and thou is not, quite, impenetrable after all.