To predict what will make you happy, ask a stranger rather than guessing yourself

Want to know how much you'd enjoy an experience? You're better off asking someone who has been through it, even if they're a complete stranger, than to find out information for yourself. This advice comes from Daniel Gilbert from Harvard University, who espoused it in his superb book Stumbling on Happiness. Now, he has found new support for the idea by studying speed-daters and people receiving feedback from their peers. 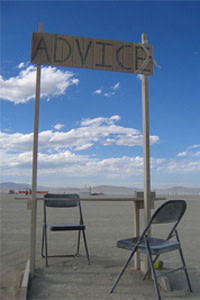 In the first study, he found that female students were better able to predict how much they would enjoy a speed-date if they listened to the experiences of strangers than if they make their own assessments based on available information. Likewise, the second study found that people more accurately foresaw their reactions to criticism when they knew how someone else had reacted than when they had the information for themselves.

This interesting result masks a second one of equal importance - people don't believe that this works. In both cases, most volunteers felt that they would be better off relying on their own counsel than to lean on the opinions of others. In some ways, that's not surprising - it is, after all, a fairly counter-intuitive idea. But it also comes on the back of a huge amount of evidence that we humans are really very bad at predicting what will make us happy.

Time and again, psychological studies have found that we overestimate how happy we will be after winning a prize, starting a new relationship or taking revenge against those who have wronged us. We also overrate our disappointment at bad test results, disability or failure to progress at work. Try as we might, we consistently fail to forecast our own emotional reactions, and we even fail to accurately remember our past experiences to be used as guides.

Gilbert says that the main reason for this is an inability to accurately imagine future events. We can close our eyes and try to picture ourselves in the future but we focus on the wrong things, we predict that our emotions will last longer than they do, and so on. Some scientists have tried to improve things by training people to mentally time-travel with more accuracy but these attempts have been largely unsuccessful.

Gilbert advocates a different ethos - use other people as living simulators. In most cases, you can find someone who has been through the same experience, and they can act as a mental surrogate. Having actually lived through the experience you're trying to picture yourself going through, they are resistant to many of the mistakes we naturally make in our predictions.

In his first experiment, Gilbert sent 33 female undergraduates on short, five-minute speed-dates with one of eight men. Each woman was asked to predict how much they would enjoy the date based on either a personal profile and photo provided by the man himself, or the report of another stranger on how she had enjoyed her date. After they made their forecast, Gilbert gave the women the second set of information so that all of them went into the date with the same info.

When they later rated their experience, those who had relied on the stranger's information more accurately predicted their enjoyment of the date than those who used the profile and photo. In fact, relying on other women's experiences halved the error between prediction and reality.

The problem was that very few of the women believed this; 75% of them believed that getting information for themselves would have allowed them to better predict the outcome of the date they were sent on, and 84% thought that doing so would better allow them to forecast a future date.

Of course, it's possible that the men may have lied on their profiles, but Gilbert thinks it unlikely. If they exaggerated their qualities, the women would have overestimated how much they would enjoy the date. In fact, they actually underestimated, and ended up having a better time than they imagined.

In his second study, Gilbert told 88 students to write a story that someone would use to class them as one of three personality types - a positive A person, a neutral B person or a negative C person. Half of them were given complete descriptions of the three types and asked to predict how they would feel if they were labelled in each category. The other half were only told how another student (from a separate group of 25) felt when they were classified as type C. They too made their predictions, and were then shown descriptions of all three personality types.

Unbeknownst to them, all the volunteers were placed in the negative C group, described as people who "sacrifice their beliefs because they seek contentment rather than challenge" or whose "long-term relationships end usually because the person's partner has found a more suitable alternative."

Again, basing their calls on a stranger's reactions proved to be a better strategy than using the descriptions they read for themselves. It reduced the difference between imagined and real emotions by 63%. And again, people don't believe this. When Gilbert told a separate group of 63 students about the experiment, he found that by a wide margin, they believed that the complete descriptions of the personality types would be more useful than the responses of other recruits.

If anything, Gilbert's experiments have underestimated the value of listening to your neighbours. In both cases, recruits relied on the emotional reactions on complete strangers; in real life, we would most likely rely on the opinions of friends, who we presumably have more in common with. And the two scenarios that Gilbert used - dating and feedback from peers - are by no means unusual.

There are clearly some major disadvantages in relying on the experiences of others. The most obvious one is that people are different from one another and one person's pleasure may be another's disgust. But the point is not that a peer's prediction will be perfect, but that it's better than what you could do yourself. Gilbert notes that people's emotional reactions aren't as different as we may think. Many of them are based on ancient bodily processes that are consistent across cultures. And we're especially likely to share emotional reactions with those people most likely to share theirs with us - our friends and family. As he says:

"[Firstly, we prefer] warm to cold, satiety to hunger, friends to enemies, winning to losing, and so on. An alien who knew all the likes and dislikes of a single human being would know a great deal about the entire species. Second, people tend to marry, befriend, work with, and live near those who share their preferences and personality traits... In short, there is little disagreement among people about the sources of pleasure and pain, and even less disagreement among neighbours."

Gilbert's experiments are compelling and they are just the tip of the iceberg in similar research on the psychology of happiness (see chapter 11 of his book for more). But more pessimistically, they also suggest that people are unlikely to take full advantage of the "power of surrogation", of using other people's experiences to simulate your own. Instead, we tend to hold to the mistaken strength of our own predictions, misguided though they may be. As Gilbert says:

"When we want to know our emotional futures, it is difficult to believe that a neighbour's experience can provide greater insight than our own best guess."

More on happiness: Money can buy happiness... if you spend it on other people