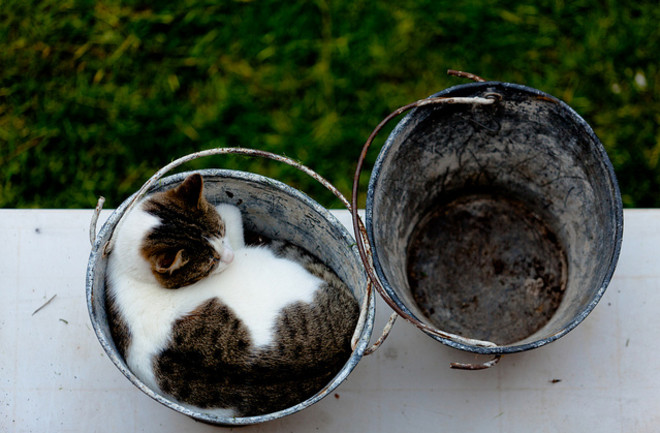 While we like to think we're pretty rational beings, we end up doing irrational things all the time. From believing in superstitions to spending too much on eBay, our quirky brains often lead us to suboptimal results. In this study, researchers asked participants to do a seemingly simple thing: pick up either of two buckets, one of which was closer to them than the other, and carry it to a designated end point. They expected the students to pick the bucket that was closer to the finish line since it would require less physical effort to carry to the end. Surprisingly, however, most people picked the closest bucket, even though they had to carry it for a longer distance. After talking to the participants, the scientists realized they were witnessing a phenomenon they term "pre-crastination": "our participants said that they chose the closer bucket to get the task done sooner. Apparently, hastening completion of the subgoal of grabbing a bucket made completion of the main goal seem closer at hand." Pre-crastination also pops up in other contexts - for example, if you are driving a route that has a long stretch and a short turn, many people will choose to do the short turn before the long stretch, rather than saving the short turn till the end. Can you think of examples of pre-crastination in your own life? If so, please share them in the comments!

Pre-Crastination: Hastening Subgoal Completion at the Expense of Extra Physical Effort. "In this article, we describe a phenomenon we discovered while conducting experiments on walking and reaching. We asked university students to pick up either of two buckets, one to the left of an alley and one to the right, and to carry the selected bucket to the alley's end. In most trials, one of the buckets was closer to the end point. We emphasized choosing the easier task, expecting participants to prefer the bucket that would be carried a shorter distance. Contrary to our expectation, participants chose the bucket that was closer to the start position, carrying it farther than the other bucket. On the basis of results from nine experiments and participants' reports, we concluded that this seemingly irrational choice reflected a tendency to pre-crastinate, a term we introduce to refer to the hastening of subgoal completion, even at the expense of extra physical effort. Other tasks also reveal this preference, which we ascribe to the desire to reduce working memory loads." Related content: NCBI ROFL: Shocking study finds New Year's resolutions work better than procrastination!NCBI ROFL: Bonus double feature: pigeons vs. grad students, it's a tie!NCBI ROFL: The science of door-holding etiquette.