Time Rolls On, Even Without Memory

A fascinating paper asks what one man with no memory - and no regrets - can really teach us about time:

Individuals With Episodic Amnesia Are Not Stuck In Time.

Researchers Carl Craver and colleagues describe the case of "KC", a former "roadie for rock bands, prone to drinking and occasional rash behavior" who suffered extensive brain damage in a motorcycle crash. In particular, KC lost his hippocampus on both sides of the brain. This area is crucial for memory, so KC experiences profound amnesia. In fact, he's one of the best known cases of the condition. 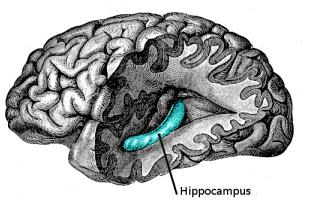 KC is unable to form any new long-term memories: he forgets everything that happens within a matter of minutes. He also, famously, cannot imagine anything happening in either the past or the future. Here's a much-quoted conversation between him and neuroscientist Endel Tulving.

On the basis of KC and other similar cases, several neuroscientists have argued that the hippocampus is vital for our ability to understand the future - or even for our very sense of the concept of time. KC has been called 'stuck in time', living in a 'permanent present', like small children and animals. However, in the new paper, Craver et al say that this is misguided. While KC does have deficits in imagining the past and future, they say, he understands them perfectly well. They quote several recent conversations between RS (one of the authors) and KC. For instance, he is able to give sensible answers to questions about how time works:

Asked about regret, he could describe and define it perfectly well. However, he could not think of any examples of specific regrets, either his own, or other peoples':

This however is not too surprising, given the nature of KC's amnesia. He lacks 'episodic' memories of the past, but he does have some 'semantic' memories, or in other words, he knows some things (like, Nixon is a US President) but he can't recall any particular events (like Watergate). In summary, Craver et al say that KC has a sense of time and understands the past and future. His only problem is with picturing specific remembered or imaginary scenarios. So some content is missing, but the framework holds - which implies that the hippocampus isn't so central to time consciousness as has been proposed.