Think Outside the Brain

How our body can influence our mind. 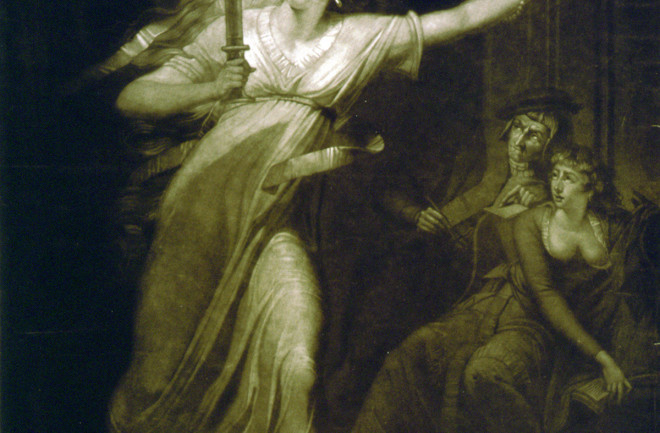 In Shakespeare's famous play, Lady Macbeth's guilt over her role in a murder is so great that she imagines bloodstains on her hands and compulsively washes them. This phenomenon, called the Macbeth effect, ties into what scientists call embodied cognition. | World History Archive/Alamy Stock Photo

It was December, and my boyfriend and I were teasing each other about the gifts we’d gotten for one another.

“Well, it’s a thing that I purchased from a store,” I said, washing my face as I got ready for bed.

“It’s stuff in a box, but originally it was in a bag,” he responded from the other room.

Fun, useless banter. But at some point, I got too specific. I told him one of his gifts was something I ordered, but the particular things would be a surprise to both of us when he opened it. As soon as I said it, I knew I’d given too much away — there were going to be follow-up questions.

And what I did next felt strange, even as I was doing it. I stopped in the middle of my nightly ritual of moisturizing my face and started brushing my teeth instead.

At the time, I thought maybe I switched to the toothbrush because lying to my boyfriend about his gift would be less obvious if my fibs were muffled and my face was partially obscured.

“Is it some sort of subscription service?”

“Is it some kind of food thing?”

I brushed harder, smothering awkward laughter: “Nooo.” (It was that, too.)

Somehow, I hid that he was getting a monthly hot sauce subscription. I just attributed it to the oh-so-clever way I’d disguised my deception.

But the motivation to suddenly brush my teeth may have been rooted in something much deeper: the Macbeth effect, named after the scene in the Shakespeare play where Lady Macbeth’s complicity in a murder leads her to imagine bloodstains on her hands. Her guilt makes her feel physically unclean even though she actually isn’t.

Studies have found Lady Macbeth’s reaction to be more than drama. For instance, researchers have shown hand-washing can assuage guilt over past misdeeds. Similarly, after thinking about an unethical act, people tend to rate household cleaning products more highly.

All of this has to do with something called embodied cognition, a relatively new idea asserting that as the mind influences the body, the body influences the mind. “Embodiment is very interesting because it’s a new way to do research on [sub]consciousness,” says neuroscientist Michael Schaefer at Medical School Berlin, “so we really can try to unravel things that we cannot see in a regular way.”

Even touching a rough surface can be enough to influence our judgement. | Jessicahyde/shutterstock

Going beyond ethics, scientists have found that physical experiences influence other aspects of cognition, too. In 2014, researchers in Germany had people read an ambiguous conversation while touching either a rough or smooth surface. When they touched the rough surface, participants were more likely to think the conversation was adversarial and harsh. And a 2010 Science study found that people tended to rate a job candidate more highly if the candidate’s résumé was attached to a heavy, rather than a light, clipboard.

So my urgent need to brush my teeth as I steered my boyfriend away from discovering his gift may not have been a tool to mask my untruths. Instead, it might’ve been a personal need to absolve myself of guilt as I cleaned my lying mouth. As Schaefer tells me, “The Macbeth effect is very interesting because it describes a link between physical cleaning and moral purity. When you’ve done something bad to a person, like lie, you have the need to clean your body, and if you get to, you feel better.”

Surprisingly, that activity was much stronger after writing a lie than writing the truth

In a study published last December, he and his team asked 35 participants to read various scenarios and then speak or write a prepared response that was either truthful or a lie. In one scenario, the volunteers found an important document that could hurt a colleague if they didn’t return it. Then the subjects told the colleague they did find it (the truth) or didn’t (a lie). Afterward, researchers showed the participants two products: a hand soap and a toothpaste or mouthwash. Then they asked them to rank each product’s desirability on a 4-point scale.

Like previous studies, this one found that if participants lied, whether verbally or in a written note, they gave the hygiene products better scores than after telling the truth. If they spoke the lie instead of writing it, they rated toothpaste and mouthwash higher than hand soap (and vice versa.) So it seems people find cleaning the “dirty” part of their body — the part that commits the lie — more desirable than cleaning the “honest” parts.

But connections between cleanliness and morality have been made before; Schaefer wanted to know what was happening in the brain. “The interesting thing is we have a map in our brain of our body,” he says. “So, everything on our body surface is represented in that map.” It’s called the somatosensory cortex, and it’s organized by body part. A touch on the foot would register in a certain part of the cortex, and a touch on the nose, another.

Using fMRI, Schaefer and his team saw that when the study participants were rating hand-washing products, the part of their brains’ somatosensory cortex linked to the hand showed a flurry of activity. Surprisingly, that activity was much stronger after writing a lie than writing the truth. The same thing happened when they rated mouth-related products. After speaking a lie, the cortical area dedicated to their mouth was much more active while people scored toothpaste and mouthwash products than it was after they told the truth.

Now I’m faced with a problem. If my boyfriend reads this, he might wise up to my own Macbeth effect, giving me away during future Christmas discussions. Maybe there’s some other Shakespearean-inspired psychological phenomenon to help me deal with my lies? Or maybe I’ll exploit the findings of another study.

“The interesting thing is we have a map in our brain of our body,” he says. “So, everything on our body surface is represented in that map.”

In a paper published in Social Cognitive and Affective Neuroscience in 2011, researchers at Yale described their discovery that people who touched a warm object were more likely to invest money with a stranger than people who touched something cold. And, like Schaefer’s study, the team observed the temperature-influenced trust effect in the brain, in an area known as the insula. Along with regulating other functions, the insula becomes more active when someone faces risk.

Turns out this warmth angle may actually be doubly useful for me. In a 2008 Science study, marketing professor Lawrence Williams and social psychologist John Bargh found that people were more likely to pick out a treat for themselves if they had recently held something cold. Yet when they’d held something hot, they were more apt to choose a gift for a friend.

So maybe this December I’ll just manipulate my boyfriend’s insula and generosity with a warm cup of tea. What could go wrong?