These Rats Have Learned How to Drive Tiny Cars 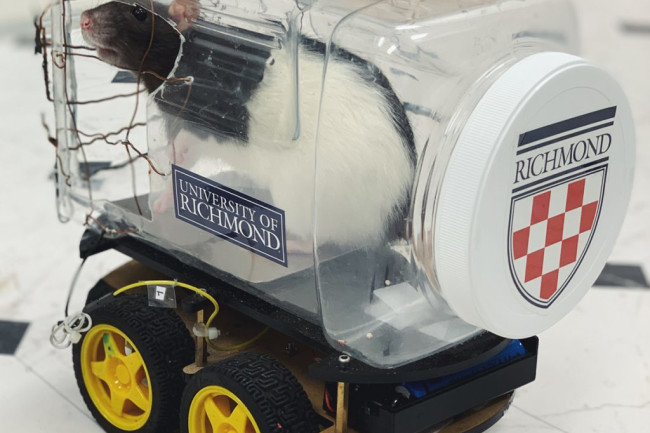 A rat in its new ride. (Credit: University of Richmond)

It's not quite as amazing as it sounds, of course. The "cars" are simple wheeled platforms controlled by means of electrically conductive bars. And the rats aren't quite navigating the Nurburgring Nordschleife yet. But the feat hints at the adaptive skills of these common lab animals, and it could lead to new kinds of tests involving neurodegenerative diseases and more.

The research appears in the journal Behavioural Brain Research.

Kelly Lambert of the University of Richmond in Virginia and her colleagues conducted the experiments with ROVs (rodent operated vehicles, as the researchers call them) with an eye toward testing the rodents’ capabilities, as New Scientist reports. Rats can already navigate complex mazes in search of tasty rewards and manipulate levers and other simple mechanisms as part of scientific examinations. But putting the two together (along with a motor and some wheels) yielded an experiment that quite literally put the rats in the driver’s seat.

The vehicles themselves are operated with three copper bars that the rats touch with their paws. The bars are hooked up to wires that sense skin contact — one bar makes the car go forward and the other two are for steering.

With a little practice, rats were able to steer their cars around an enclosed space in search of sugary Froot Loops cereal. As the rewards got progressively farther away, they had to sharpen their driving skills to get there.

Far from learning to embrace road rage, the rats seemed to rather enjoy their time behind the wheel (or steering bars, as it were). Looking at the ratio of hormones associated with stress in the rats over time, the researchers report that long-term practice driving the cars actually made the rats more relaxed compared with controls who just went for a ride.

Beyond teaching rats a new skill, Lambert thinks her unique experiment might help with research into cognitive diseases like Parkinson’s. Rats trained in complex skills might be better models of the more subtle changes that occur in some neurodegenerative and psychiatric diseases.

In other words, it’s unlikely we’ve seen the last of these rats on wheels.

MindFun and Games with Neuroscience
Recommendations From Our Store