The Wit and Wisdom of Psychology Abstracts

The abstract to a scientific paper is a brief summary of the content. The start of an abstract, in turn, serves to introduce the subject of the research. This is fine for most kinds of science, but in the case of psychology (and parts of neuroscience) it can produce some rather odd results. In these fields, the topic of much research is everyday human behaviours and experiences. How do you introduce something that everyone already knows about? How do you make the commonplace sound like a scientific problem? Well... it's hard. Hard to do it without sounding like a cross between Spock and Captain Obvious. So that's often what ends up happening. I thought I'd compile some of my favourite examples of this genre into one compendium of wisdom. Presenting... the Psychology Abstract's Introduction to Life. 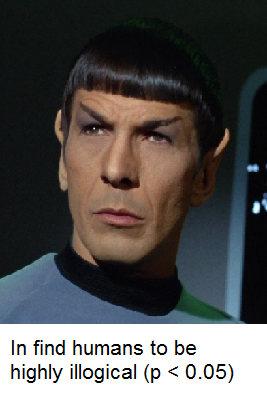 The sense of the body is deeply rooted in humans

. Individuals often feel anxious in anticipation of tasks such as speaking in public or meeting with a boss

. Confessions are people's way of coming clean, sharing unethical acts with others

. To overcome unhealthy behaviors, one must be able to make better choices

. The need to engage in multiple tasks simultaneously is often encountered in everyday experience, but coordinating between two or more tasks can lead to impaired performance

. Adults tend to like individuals who are similar to themselves

, and membership in a valued group can provide an individual with a variety of benefits

. Both emotional facial expressions and markers of racial-group belonging are ubiquitous signals in social interaction

- and perceivers spontaneously sort other people's faces into social categories

. It is well known that multilingual speakers' non-native productions are accented

Meeting potential sexual/romantic partners for mutual pleasure is one of the main reasons young adults go to bars. But the desires of one sex can lead to deceptive exploitation by the other sex. Facial attractiveness represents an important component of an individual's overall attractiveness as a potential mating partner. Marital quality is a major contributor to happiness and health. But trust and distrust are essential elements of human interaction.

Perception is often influenced by context

yet humans inhabit environments that are both social and physical

. The objects around us constantly move and interact

. Animation creates a vivid, virtual world and expands the scope of human imagination

. The social category "children" defines a group of individuals who are perceived to be distinct

. Yet, individuals regularly face adversity in the pursuit of goals that require ongoing commitment; whether or not individuals persist in the face of adversity greatly affects the likelihood that they will achieve their goals